Sunil Gavaskar praised Anurag Thakur for being very, very available to the media.

India‘s new cricket chief Anurag Thakur is a close ally of right-wing Prime Minister Narendra Modi and a media-friendly administrator seen as capable of cleaning up the governing body’s tarnished image. Thakur, who heads the youth wing of Modi’s ruling Bharatiya Janata Party (BJP), is now charged with running the Board of Control for Cricket in India (BCCI), one of the most powerful bodies in world sport.  The three-time member of parliament on Sunday became the youngest-ever president of the cash-rich but under-fire BCCI, at the age of just 41. Thakur is comfortable in the limelight and could not be more different from his 58-year-old predecessor Shashank Manohar, who shunned the media and did not even own a mobile phone. Full Cricket Scorecard: Kolkata Knight Riders  vs  Sunrisers Hyderabad , Live Score, 55th T20 Match, IPL 2016

“He is one of the more visible, forthright and efficient administrators in the game,” said Boria Majumdar, a veteran sports journalist. Indian batting great Sunil Gavaskar praised Thakur for being “very, very available to the media” at a time when the BCCI needs someone confident to get its views across to the public. The president of the BCCI is seen by many as the most powerful post in global cricket. The BCCI benefits from huge TV deals that have in the past allowed it to effectively run the International Cricket Council (ICC) with its allies, Australia and England. READ: Gautam Gambhir, Yuvraj Singh, Harbhajan Singh tweet congratulatory messages to new BCCI President Anurag Thakur

Thakur was credited with getting Indian legends Sachin Tendulkar, VVS Laxman and Sourav Ganguly to join a cricket advisory committee that he set up. “He is young, his ideas are new and he is not shy of taking decisions for the improvement of the game,” Nikhil Chopra, a former Indian cricketer, told AFP. READ: Analysing Anurag Thakur’s future course as BCCI President

But the Indian board is under immense pressure to implement wide-ranging reforms laid out by the country’s highest court after a string of corruption scandals in recent years. Manohar quit earlier this month under growing pressure from the Supreme Court to carry out retired judge Rajendra Mal Lodha’s recommendations for reforming the BCCI. READ: Anurag Thakur becomes one of the youngest BCCI President

Thakur, an MP in Himachal Pradesh state, has walked the corridors of the BCCI since 2000, when he was elected president of his state association, and was most recently secretary. He has been credited with astute handling of the fallout from the Lodha report, but as president will have to use all of his political acumen to guide the BCCI through the storm. Lodha’s report, drawn up in the wake of the Indian Premier League match-fixing scandal, advocated the introduction of age limits for BCCI office-bearers and a ban on television adverts between overs during live broadcasts. VIDEO: Anurag Thakur files nomination papers for BCCI Presidential election

“The BCCI is not looking for an escape route. We believe in transparency and accountability,” Thakur said in February. “In the last nine months, we have done things which would indicate that we are in the right direction.” However some say Thakur still must convince the government that the BCCI is serious about making genuine changes. “In this moment of crisis with the Lodha Commission report hanging on their heads the BCCI needed somebody like him to steer them in the right direction,” journalist Majumdar told AFP, adding that being from the BJP would help. READ: CAB secretary Aditya Verma threatens perjury case against BCCI secretary Anurag Thakur

The ambitious Thakur took over the Himachal Pradesh Cricket Association aged just 25. He even played one first class match in 2000-01, making a duck off seven balls, but satisfying the rule that allows only first-class players to be national selectors. Thakur showed political nous when he stayed clear of siding with any camp during Narayanaswami Srinivasan’s controversial tenure as BCCI chief between 2011-2014.

He quickly became the face of the BCCI as an ill and ageing president Jagmohan Dalmiya — elected as a consensus candidate after Srinivasan’s ousting — remained titular head until he died in September 2015. Thakur’s big break came last year when he pipped the incumbent to the secretary’s post by a single vote. He became a popular face amongst the cricket-crazy public thanks to regular TV appearances, and during Manohar’s six-month stint at the helm revelled in his role as the BCCI’s public voice. 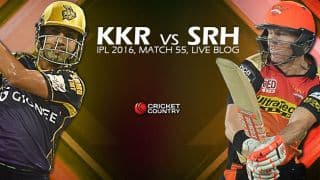