The Supreme Court has agreed to hear cricketer S Sreesanth's plea against the life-ban imposed on him by the Board of Control for Cricket in India.

The Supreme Court has agreed to hear cricketer S Sreesanth‘s plea against the life-ban imposed on him by the Board of Control for Cricket in India (BCCI). The pacer was received the punishment after his name emerged in the IPL 2013 spot-fixing scandal.

“Let the appeal be listed for final hearing after eight weeks,” a bench of Chief Justice Dipak Misra and Justices A M Khanwilkar and D Y Chandrachud said was quoted as saying by PTI on Monday.

The life ban on Sreesanth was lifted by a single bench of Keral High Court on August 7 last year but later on, the division bench of the high court set aside the judgment to restore the ban.

The 34-year-old later moved to the apex court challenging the ban saying it was extremely harsh and the fact that he hasn’t been playing professional cricket for the past five years should be punishment enough.

On its part, the BCCI claims that since the telephonic evidence proves that Sreesanth did take money to bowl no balls during IPL 2013, it’s an “open and shut” case.

The 36 accused in the spot-fixing case were let off by a Patiala House court in July 2015 but BCCI hasn’t changed its disciplinary decision. 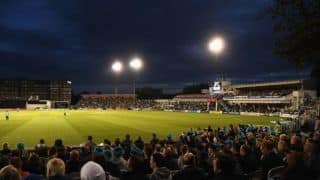 2018 Asia Cup Qualifier: When and where to watch, teams and live streaming