Uttar Pradesh notched up a clinical 58-run win over Tripura on Sunday in a Syed Mushtaq Ali 2019 Group E Round 3 match on Sunday that came on the back of exceptional performances by Priyam Garg, Rinku Singh with the bat and Ankit Rajpoot with the ball.

Uttar Pradesh piled 184 runs for the loss of four wickets after opting to bat at Palam in New Delhi. Although Suresh Raina had an off day , scoring just 1, an unbeaten 59 from Garg that came in 48 deliveries and more importantly, a belligerent 52 off just 16 from Rinku powered UP to above the 180-run mark. (ALSO READ: Uttarakhand beat Puducherry by 10 runs, record third win)

In reply, Tripura could manage to reach 126/8 in 20 overs with Ankit Rajpoot applying the brakes on the run scoring snapping four wickets in his four overs going for just 17 runs. Ankit Chaudhary added three for 19. (ALSO READ: Pandey, Gopal star in Karnataka’s rout of Arunachal)

A much-needed victory for Uttar Pradesh puts them on second place with eight points, while Tripura, having recorded their third straight defeat, at firmly occupying the bottom position of the eight-team group. 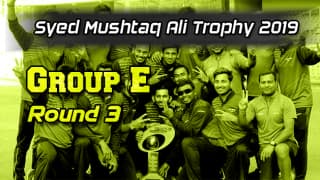 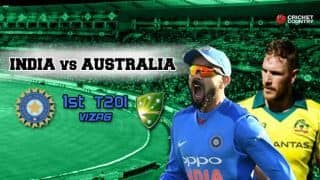