Maharashtra were helped to the win, courtesy an allround effort by Divyang Himganekar, who scored an unbeaten 35 coupled with two wickets.

A belligerent 35* off 17 in the end from Divyang Himganekar that included three boundaries and two towering sixes sealed Maharashtra s four-wicket win over Gujarat in the Super League Group A stage of the Syed Mushtaq Ali 2019 trophy on Sunday.

Chasing 144, Maharashtra slipped to 29/3 in the fifth over with pacer Hemang Patel accounting for two wickets in captain Rahul Tripathi (21) and Ankit Bawne, who departed for a duck. (ALSO READ: Vidarbha beat UP by 10 runs to pocket second straight win)

Naushad Shaikh then steadied the innings making 28 off 33 with the help of three boundaries before he fell to Karan Patel in the 14th over.

It took a brilliant 63-run partnership for the unconquered seventh wicket between Azim Kazi and Himganekar to ensure Maharashtra s second straight win victory over Bengal on Saturday.

Kazi tonked three sixes in his unbeaten 39 off 29, but it was Himganekar, who took the game away from Gujarat as Maharashtra chased down the target with one ball to spare. (ALSO READ: Bengal beat Jharkhand for second win)

Earlier, batting first at the Holkar Stadium in Indore, Gujarat lost half their side with 75 on the board in the 11th over. Lack of any partnerships saw Gujarat post a decent total thanks to Chirag Gandhi s 35 off 40. 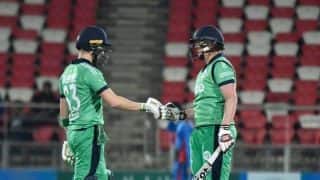