While skipper Hanuma Vihari did not really enjoy a good time in the middle as a batsman, Andhra s batting firepower was on a full display as they beat Manipur by 91 runs in the Group A Round 7 encounter of the Syed Mushtaq Ali Trophy 2019 in Vijayawada on Saturday. (ALSO READ: Andhra beat Jharkhand by 3 runs in last-over thriller)

Andhra tormented the Manipuri bowling attack after winning the toss and electing to bat at the Chukkapalli Pitchaiah Cricket Ground, Mulapadu. The duo of Ashwin Hebbar and Pranith Manyala, who scored 71 runs each, scored 118 runs for the opening wicket as Andhra were off to a flying start.

While the former was dismissed in the 12th over and Vihari got out in the 14th over, Pranith Manyala continued his attacking display before perishing off Yashpal Singh s bowling in the 15th over with 165 runs on the board. (ALSO READ: Uttar Pradesh progress to Super League after washout)

However, that did not really slow down Andhra as Ricky Bhui and Girinath Reddy took off from where the opening duo had left and hammered 87 more runs in the last five overs to take Andhra to 252 by the end of 20 overs.

Such was the ferociousness of Andhra batsmen that Bishworjit Konthoujam s 4-0-38-0 spell was the most economical bowling spell with all the other bowlers going for ten or more runs/over.

While Mayank Raghav and Chingangbam Singh did provide Manipur with a flying start and Priyojit Singh scored 45 off 31 balls, the total of 252 runs was always too difficult to achieve. Dasari Swaroop s three-wicket haul, conceding 26 runs, also played a part in disallowing Manipur to stay alive in the chase. 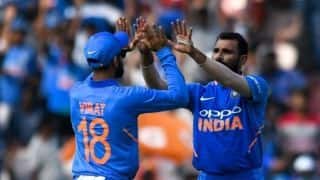