Delhi managed to get over the top-order collapse and managed to beat Uttar Pradesh in Group B Super League clash of the Syed Mushtaq Ali Trophy 2019 at the Holkar Cricket Stadium in Indore on Monday.

Chasing 141, Delhi were three down with four runs on the board as Ankit Rajpoot and Yash Dayal dismissed Manjot Kalra, Hiten Dalal and Unmukt Chand. Rajpoot struck for the third time as Nitish Rana perished for 16, with only 45 runs on the board. (ALSO READ: Jay Bista, Shardul Thakur, Tushar Deshpande star as Mumbai beat Vidarbha)

Dhruv Shorey and Pranshu Vijayran then steadied the Delhi innings with a 52-run partnership before Shiva Singh dismissed Pranshu Vijayran after scoring a quickfire 34 off 18 balls. Shorey, though, stayed put and remained unbeaten to help Delhi cross the finish line with two balls to spare and four wickets in hand.

Priyam Garg scored 30 off 19 balls and Shubham Chaubey chipped in with 29 off 21 balls. But Pawan Negi and Navdeep Saini did not allow Uttar Pradesh batsmen to score at brisk pace as the spin-pace bowling duo shared five wickets between themselves and restricted Uttar Pradesh to 140.

While Negi dismissed the UP openers – Upendra Yadav and Samarth Singh – and Nath, Saini sent Garg and Rinku Singh packing. 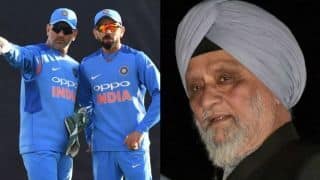