Jay Bista (73 not out off 51 balls), Shardul Thakur (2/21) and Tushar Deshpande (3/38) played big roles as Mumbai beat Vidarbha in Group B Super League clash in the Syed Mushtaq Ali Trophy 2019 at the Holkar Cricket Stadium in Indore on Monday.

The Shreyas Iyer-led side beat this season s Ranji Trophy and Irani Cup champions by six wickets to register their second consecutive win in the Super League stage following their win against Delhi in the previous game.

Shardul Thakur then kept Vidarbha in check, scalping the wickets of Ravi Jangid and Apoorv Wankhade, after Shams Mulani dismissed Ganesh Satish and Siddhesh Lad removed Rushabh Rathod. While Umesh Yadav swung his bat, scoring 25 off 12 balls, Vidarbha could not go past 140.

Mumbai, in chase, lost Lad early in chase. But Bista and Iyer added 61 runs together, with the latter scoring 28 off 22 balls before Akshay Wakhare dismissed the Mumbai captain. Suryakumar Yadav then joined Bista in the middle and scored a quickfire 26 off 10 balls. While Surya and Shivam Dube perished in a quick succession, Bista made sure that Mumbai cross the finish line, remaining unbeaten 73 off 51 balls. (ALSO READ: Inspired by Dale Steyn, Tushar Deshpande cracks his no-ball conundrum)

Mumbai will next face Uttar Pradesh on March 12 while Vidarbha will take on Karnataka, who had handed Mumbai a defeat in their first game in Super League. 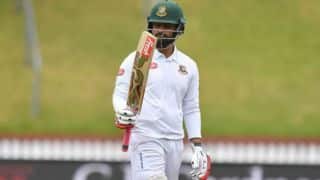 India 'B' beat India ‘A’ to win Under-19 Quadrangular title