Shaheen Afridi has become the youngest ever bowler at 19 years and 90 days to claim a five-wicket haul in the World Cup.

He entered the record books with a six-wicket haul against Bangladesh in the World Cup and young Pakistan speedster Shaheen Afridi said it was “incredible” to achieve the feat at Lord’s on Friday.

Afridi became the youngest ever bowler at 19 years and 90 days to claim a five-wicket haul in the World Cup when his six for 35 helped Pakistan dismiss Bangladesh for 221 and notch up a 94-run win in their last outing.

“I’m so happy with performance and taking six wickets is incredible,” said Shaheen, who also became the first Pakistan bowler to take six wickets in the World Cup.

“It means so much to have this record when you think of all the legends of Pakistan cricket. To be able to take six wickets at Lord’s is a very big moment for me and my family, it’s the Home of Cricket and a very special place.

“We’ve played such good cricket in the last four matches and it’s disappointing it’s now over. This is my first World Cup, and the same for other players too, that is very good news for the future.”

Another notable performance in the match came from opener Imam-ul-Haq, who scored a run-a-ball 100 to set the platform for Pakistan’s 315 for nine.

However, Imam was left to rue the missed chances as Pakistan exited the tournament despite four successive wins.

The 1992 champions missed out on the knockout stage due to their net run-rate which was less than New Zealand, who qualified as the fourth semifinalist.

“I think the Australia defeat hurts me a lot. I was set and playing well. I should have won that match for Pakistan,” he said.

“We lost four quick wickets and I think I should have won that game and we would have beaten a big team in the World Cup.

“I had starts but couldn’t score big. I am very young so I have learned a lot in this World Cup. What mistakes I have committed; I have learned from them and I am sure that will help me.” 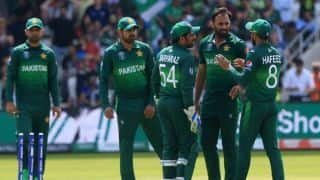