The debutant Craig Overton impressed the coach Trevor Bayliss with his performance.

Debutant Craig Overton had impressed England coach Trevor Bayliss with his performance in the Adelaide Test. England had ended up on the losing side, but they had a few positives to look up to. Overton did admit he had never faced short bowling this aggressive before but said his Test debut was good fun .

After electing to field, England got their first breakthrough in the 15th over but the crucial wicket of Steven Smith came in the 63rd. As Smith was nearing yet another half-century, Overton bowled him to get a maiden Test wicket to cherish.

I’ve probably not been peppered like that in First-Class cricket before, Overton said. You might come up against one fast bowler in each side in a county game, but to have three like that is tough work.

But you have to expect that in Australia. I knew what I was getting into going out to bat in the middle. You could tell from the field; especially when Pat Cummins came around the wicket at me. I was pretty much waiting for it. I think you have to enjoy it. It was good fun and I felt like I played it pretty well.

Jake Ball, who played the first Test, was dismissed by short deliveries in both the innings. However, Overton dealt well with the short balls. Only once was he hit on the chest guard, by Pat Cummins. He admitted the blow remains a bit sore and a bit bruised and didn t seem much concerned about the fact that will threaten his involvement in the third match.

He [Cummins] didn’t say anything, Overton said. If you are hit in the chest you know it’s not going to kill you. It might give you a broken bone, but it’s not life threatening. It’s a bit different when you get hit on the head. That’s when you become worried.

Most of the Australia team are good lads and came up to make sure I was all right after I was hit. On the pitch they like to create a bit of a bubble and say a few words. But off the pitch they seem like pretty good lads. I haven’t had a scan or anything. We think it’s just bruising. We are not too worried.

Overton, playing his maiden international match, admitted that he is not used to such workload . He bowled 33 overs in the first innings and fielded for almost 150 overs. He admits that he will have to to get used to these factors: It is not common to field for 150 overs in First-Class cricket back home. And to bowl that amount of overs was a challenge. But it’s one I have to get used to.

I know I’m not the quickest I am the first to admit that so for me it’s all about control and little variations. The bad balls are going to be put away. It’s all about doing the basics right. 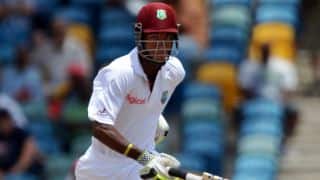