In view of the ghastly incident, DDCA have also increased security measures at all venues where selection trials will be held.

Dedha along with a few of his aides, had physically assaulted former Bhandari for not selecting him in the state U-23 side for the Syed Mushtaq Ali Trophy during a selection trial at the St Stephen’s ground on Monday.

The decision to ban Dedha was taken during a DDCA meeting on Wednesday which was also attended by former India batsman Gautam Gambhir, who was the first to voice out a life ban on the accused following the brutal attack.

We have decided to ban him from all forms of cricket for life. We have passed a resolution and this decision will be formalised by the Apex Council by the evening, DDCA president Rajat Sharma told CricketNext. (ALSO READ: Surprised and shocked, strict action must be taken: Sourav Ganguly on Amit Bhandari assault)

Many other cricketers such as Virender Sehwag and Ashish Nehra concurred with Gambhir s decision and stated that anyone who threaten selectors or officials should receive no less than life bans. Gambhir is a member of the Apex Council and a senior cricketer. So, he was a special invitee to this meeting, Sharma said.

In view of the ghastly incident, DDCA have also increased security measures at all venues where selection trials will be held. The venue of the trials will be out-of-bounds for anyone other than the cricketers. Their parents, friends or anyone else will not be allowed. To ensure this, we ll increase security at all the venues for this not just Kotla, Sharma informed. (ALSO READ: Gautam Gambhir calls for life ban on player who assaulted Amit Bhandari)

Kotla there is enough security. At the other grounds which are not directly under us, we ll collaborate with Delhi Police, so that they can provide additional security.

Sharma also said that selectors and officials, who receive threats ought to inform the association so that punitive measures could be taken.

If any selector, coach or manager gets any threat, they should inform the DDCA and we can take appropriate action, Sharma said. (ALSO READ: Gautam Gambhir says he played no role in DDCA Cricket Committee s resignation)

Reportedly, Bhandari was attacked with hockey sticks and iron rods by Dedha and 15 hired goons when he was watching a warm-up game of the senior Delhi team. Bhandari sustained injuries on his forehead and other body parts.

The Delhi Police arrested Dedha and he is currently under police custody.

Meanwhile, Ishant Sharma will lead Delhi for the Syed Mushtaq Ali T20 while Nitish Rana was appointed the vice-captain. The selectors announced a 15-member squad for the tournament. 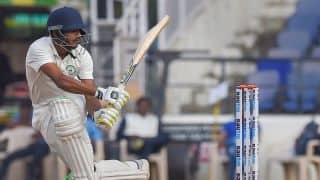