Akmal helps Pakistan recover from 117 for six against Afghanistan in Asia Cup match.

An unbeaten 102 from Umar Akmal rescued Pakistan from 117 for six to reach 248 for eight in the third Asia Cup 2014 match against Afghanistan at Fatullah on Friday.

Before the start of the match, Mohammad Nabi was a confident skipper. Half of the Afghan team were here recently playing for various clubs in Bangladesh. With a fair experience of local conditions, it was tough to miss the confidence with which the Afghan players stepped in to play. They won the toss and Nabi chose to field first.

The bowlers did start off in a disciplined manner to keep the batsmen in check. But as the game progressed, Pakistan took keen interest in giving Afghanistan the upper-hand by some mindless shots complemented by an embarrassing run-out to send back their own skipper Misbah-ul-Haq for a duck.

The first powerplay was probably sanest phase of Pakistan’s innings with the openers getting off to a solid start. Sharjeel Khan struggled a bit, but Ahmed Shehzad was off fluently scoring at will. The two Zadran’s — Shapoor and Dawlat — bowled well until Dawlat’s line and length started going for a toss. Shehzad took full advantage of it cracking a few fluent drives for boundaries. After the first powerplay they were 39 for no loss and within quicktime they had crossed the fifty run mark. It was their first fifty partnership in 11 innings together.

Since then started the harakiri with Sharjeel’s aggressive instinct getting the better of him. He slogged left-arm spinner Hamza Hotak straight to midwicket.

Pakistan’s two reliable batsmen Shehzad and Mohammad Hafeez steadied the ship. Full credit to Afghanistan for keeping a tight leash on the batsmen during this phase. Mirwais Ashraf with his gentle pace was tough to get away with. For some reason, Hafeez though it was wise to suddenly breakway with a huge hit, he tried to slog Ashraf only to give a simple catch to Mohammad Nabi at mid-off. The alarm bells were still far away with Shehzad getting to his sixth ODI fifty and Pakistan’s Mr. Dependable Misbah-ul-Haq at the crease.

It took just two balls to make a mess of the Pakistan innings. Leggie Samiullah Shenwari, Afghan’s leading wickettaker was brought into bowl and Shehzad having hit a boundary, went for one more big hit only to see his stumps shattered. With all due respect to the disciplined Afghanistan bowling, Pakistan had generously donated their wickets away. But there was more to come.

Shoaib Maqsood, the new batsman, drove to the right of cover fielder and slipped will attempting a quick single. While Misbah ambled across towards the strikers end with his eyes on the fielder, Maqsood instinctively got up and sprinted towards the same end as Misbah. An elated wicketkeeper Shahzad collected the throw from the fielder and ran towards the non-strikers end to whip the bails off. Misbah’s last duck was also a run-out without facing a ball against Ireland in 2013.

Maqsood held his head in distraught. None could understand what kept the Pakistan switched on the auto-destruction mode as Maqsood slogged straight to mid-on. In walked the mercurial Shahid Afridi and the worst fears came true as he once again mindlessly slogged to see his stumps shattered. Pakistan had slipped to 117 for six.

There were no prizes for guessing what the glum faces of coach Moin Khan and batting coach Zaheer Abbas were saying to Misbah. Luckily for Pakistan, Umar Akmal toned down his aggression and along with Anwar Ali added 60 runs to take them closer to 200. Akmal though had almost thrown his wicket away but the point fielder Shenwari had floored a simple catch when he was on 28.

Pakistan managed 22 runs in powerplay. Anwar and Akmal looked to up the ante when Anwar was caught brilliantly by Nawroz Mangal for 21. Akmal continued to anchor the innings as he completed his 19th One-Day International (ODI) fifty. Umar Gul (12) gave good support with some big hits towards the end.

Afghanistan’s inconsistent length in the death overs allowed Akmal to knock off a few more runs and inch closer to his hundred. In the last over, Akmal slapped two boundaries and a six to complete his second ODI hundred. It was Akmal’s first ton after 81 ODIs.

This score may not the ideal one with the flat wicket that was on offer, but Pakistan will accept anything after the batting collapse early on. 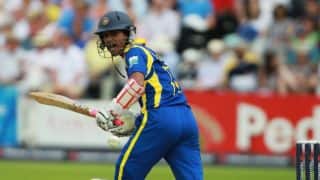