While Umesh has had to warm up the bench for most time since the last year, the situation has not affected him mentally.

October 14, 2018 Umesh Yadav‘s maiden 10-wicket haul helped India thrash West Indies in the second Test at Hyderabad. Cut to August 21, 2019, the eve of the two-match Test series opener at Antigua, against the same opposition, and the fiery fast bowler seems no where in sight to stake claim for a place in the playing XI.

It hasn’t been an easy ride for the Vidarbha pacer in the past year. The 31-year old played only five Tests in 2018, and just one during the tour of Australia where he claimed two wickets in Perth. However, the tour to West Indies began positively with Umesh picking up three wickets in the first innings in Antigua against West Indies A.

So, what went wrong with Umesh, who has not played for India since the last eight months?

“It was a matter of hitting the right areas, adapting to different conditions, specially to the red and white ball. On certain days, the ball moves a bit more, while on others, it goes a little straighter. Umesh needs to check his line and length,” Yadav’s childhood coach Subroto Banerjee tells CricketCountry.

After this year’s Indian Premier League (IPL), Umesh went back to Banerjee at his academy in Vidarbha to work on his bowling. “I was talking to him on how to sort out these adjustments. I have sorted out a few things like getting his length back on track, hitting the right areas and a little bit of strategising. At the moment, he’s looking good,” former India pacer Banerjee explains.

While Umesh has had to warm up the bench for most part last year, the situation has not affected him mentally. “His mental frame of mind is really strong. I have never doubted that. Whatever situation you throw him in, he will always find a way out,” Banerjee said about his student.

On the mental front, Banerjee expects Umesh to be a little smarter.

“When you run with that ball, your mindset has to be correct and he should be clear what he’s going to do. After representing India for 9-10 years, you cannot do too much (in terms of changing the bowler), but you can get clever as a bowler. These are the things he has to work on, which we also did it during that one week. He has to become a little smarter,” he said.

“Umesh has all the variations, he is most talented bowler, but now he needs to utilise that talent and turn it into a good performance. I always keep telling him that I will keep advising you, but it’s up to you to implement it. He should not hesitate to implement it or have no fear about going for runs. In bowling, the more you think, the more you will suffer. When you are in for that run-up, think of uprooting that wicket, that’s all.”

Meanwhile, Banerjee has also thrown his hat into the ring for the position of India’s bowling coach. “It went well. I have covered all the questions nicely in those 40 minutes. I didn’t give a presentation since I like to talk,” the 50-year-old pacer, on the lookout for a job, said. 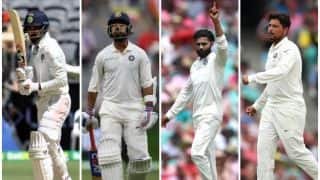