Glenn Maxwell has opened up on life on the road as a cricketer saying the punishing schedule takes a toll on the mental well being of a player.

Australian big-hitter Glenn Maxwell has opened up on life on the road as a cricketer saying the punishing schedule takes a toll on the mental well being of a player.

ALSO READ: Maxwell to miss IPL 2019 to gear up for Test berth

With several T20 leagues cropping up in recent years, the landscape has undergone a sea change with non-stop cricket being played in a calender year. While from outside, a cricketer’s life might seem glamorous but it’s not projecting the right image, says Maxwell.

“I know there’s been times when I’ve been struggling, and felt like it’s a little bit too much. It does take a toll on you mentally,” Maxwell told The Age. “It’s easy to overlook on the outside, because all [the fans and media] see is players going out there and play in front of the big crowds, thinking how good a life they must have.

More recently, Australia international Ashton Agar decided to skip a Sheffield Shield game to ‘freshen up’ after a long year of touring.

“… it’s extremely tough. You spend a lot of time in a hotel by yourself, away from your family, it is a tough time. A guy like Ashton Agar’s been on the road for so long, not playing. You sit in the hotel room by yourself, you haven’t played cricket in over a month, a month and a half.

”You’re wondering, ‘am I in form, am I close?’ Am I anywhere near it? It can be tough. I do sympathise with the guys that are going through that, because I know how it feels, especially after the year I’ve had. I think that gets overlooked at times. There’s a lot of travel, a lot of time away from family. As much as people want to see more and more cricket, it does take a toll on players,” Maxwell, 30, said.

Maxwell also touched upon how brutal can the world of social media can be as it gives users easy access to get in touch with the players and teams. “The public [need] to be a bit more patient, and potentially a bit more forgiving on certain players. In a world with social media, and complete unfiltered access to players, it can be quite daunting, and hard to deal with. I know it’s a player’s choice to be on social media, but sometimes it’s just hard to ignore.

He continued, “I’ve copped my fair share of bakes, I’m pretty used to it. I’m OK. But I worry for the younger players coming in. Social media is a pretty dangerous world. It’s pretty scary how ruthless people can be.” 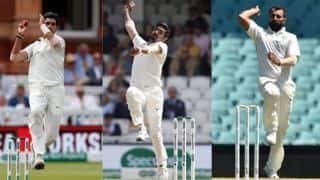