Bhuvneshwar Kumar making way for a fit-again Hardik Pandya was the only change to India’s T20I squad for the upcoming home series against South Africa.

It seemed like the right-arm pacer might have been rested but as per a report in Times of India, Bhuvneshwar hasn’t been rested. He is unwell and was not available for selection.

“Bhuvneshwar has not been given rest. It is claimed that he is unavailable because he is unwell,” a source told TOI. The 29-year-old was a part of World Cup 2019 and was selected for the complete West Indies series. He did play three T20Is and three ODIs but wasn’t included in the playing XI. for the opening Test. Bhuvneshwar, following an injury ahead of England Tests last year, has lost his place in playing XI and hasn’t played any Test since January 2018.

Deepak Chahar, Khaleel Ahmed and Navdeep Saini are three pacers in the T20I squad. They will be assisted by all-rounder Hardik.

Surprisingly, there was no place for either of Kuldeep Yadav and Yuzvendra CHahal as Krunal Pandya, Washington Sundar, Rahul Chahar and Ravindra Jadeja retained their spots.

MS Dhoni also didn’t make it to the squad as he is unavailable for selection, chief selector MSK Prasad confirmed to India Today. The former Indian skipper had taken a break following Word Cup 2019 to serve the Indian army. His 15-day stint with the Indian army completed a couple of weeks back.

There was no rest for Virat Kohli. The Indian skipper will continue to lead the team with Rohit Sharma as his deputy. Manish Pandey and Shreyas Iyer will be competing for a place in the middle-order. 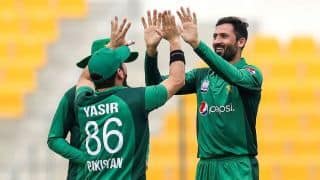