Upul Tharanga and Niroshan Dickwella put on 139 in just 97 deliveries for the first wicket, which set up an excellent platform for Sri Lanka.

Sri Lanka came close to pulling off a remarkable win, but it is South Africa, who have prevailed and won the fourth One-Day International (ODI) by 23 runs. With this win, South Africa go 4-0 up and are just a win away from a 5-0 whitewash. Moreover, if they win the next game, they also go to No. 1 position in the ICC ODI rankings. Upul Tharanga played an excellent innings, but his 119 off 90 eventually went in vain as the target was a bit too much. He and Niroshan Dickwella put on 139 from just 97 deliveries for the first wicket, which set up an excellent platform for the chase but in the end the inexperience went on to hurt them. Full Cricket Scorecard: South Africa vs Sri Lanka 4th ODI at Cape Town

Despite losing Dickwella for 58 off 47, Tharanga kept attacking, eventually reaching his century off just 73 deliveries. He put on 64 runs with Kusal Mendis for the second wicket. But Mendis s wicket triggered a bit of a collapse. From 203 for 1, Sri Lanka were reduced to 228 for 4, with a mountain to climb. One of those wickets was of Tharanga, who was dismissed for 119 off 90, an innings that consisted 11 fours and seven sixes. Asela Gunaratne and Sandun Weerakkody then joined hands to do some repair work. Full Cricket Updates: South Africa vs Sri Lanka, 4th ODI at Cape Town

They added 70 in less than 10 overs for the fifth wicket, which gave Sri Lanka a glimmer of hope. Weerakkody got to his maiden ODI fifty off 46 deliveries and set his sights on guiding his side home. But the very next delivery saw Gunaratne dismissed for 38 off 31. Nuwan Kulasekara was then trapped leg before by Imran Tahir. But Sri Lanka s last hope of going over the line came to an end when Weerakkody was dismissed for 58. The two Lahirus Kumara and Madhushanka joined hands after Sachith Pathirana was brilliantly caught by Quinton de Kock behind the wickets.

Madhushanka was dismissed by Wayne Parnell, giving him his third wicket. South Africa then completed the formalities by claiming the final wickets with a few overs to go.

Earlier, Faf du Plessis excellent 185 off 141 ensured South Africa posted a mammoth total of 367 for 5 on the board. Du Plessis fell three runs short of registering the highest individual score by a South African. Du Plessis put on 100 for the second wicket with de Kock and then 137 with AB de Villiers for the third wicket, which helped South Africa to a big score. Pathirana was the pick of the bowlers for Sri Lanka, finishing with 2 for 55 in his 10 overs.

South Africa had won the toss and elected to bat. Sri Lanka had dropped Dinesh Chandimal for this game due to poor form. As a result, Dickwella was the designated wicketkeeper for this match. 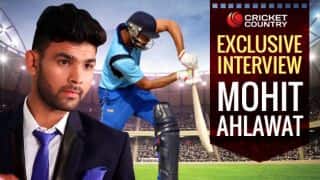