Gautam Gambhir marked his 37th birthday in style as he struck a quickfire century to guide Delhi into the Vijay Hazare Trophy 2018-19 semifinals.

Gautam Gambhir marked his 37th birthday in style as he struck a quickfire century to guide Delhi into the Vijay Hazare Trophy 2018-19 semifinals as they beat Haryana by five wickets. In reply to Haryana’s 229 all out that saw Kulwant Khejroliya recording a hat-trick, Delhi were powered by Gambhir’s 72-ball 104 as they made 230/5 in 39.2 overs to join Mumbai in the last-four stage.

Gambhir was in some form as he took just 29 deliveries to reach his half-century to kickstart Delhi’s chase in imposing fashion. With his opening partner Umukt Chand, who made 15, he brought up Delhi’s fifty in just 5.4 overs.

He brought up his century, the second of the season and 21st of List A career, off 69 deliveries. Together with Dhruv Shorey, who struck a half-century, he added 118 runs for the third wicket as the duo deflated Haryana attack.

After Gambhir was stumped on 104 off Rahul Tewatia, Delhi lost two more wickets in quick intervals before Nitish Rana struck three sixes in an over of legspinnr Yuzvendra Chahal to bring Delhi on the brink.

Haryana were off to a terrible start after their captain Amit Mishra opted to bat at the M Chinnaswamy Stadium. Kulwant Khejroliya struck twice as they were reduced to 37/3 inside 10 overs.

But Chaitanaya Bishnoi and Pramod Chandila got together and guided them out of trouble. They added 140 runs for the fourth wicket to neutralise the early damage.

But Khejroliya was still to leave a major impact, derailing their innings, again. During a fiery spell, he picked up a hat-trick to remove Bishnoi (85), Chandila (59) and Mishra (0). He eventually finished with figures of 6/31 as Haryana were bowled out for a below-par total. South Africa vs Zimbabwe, 3rd T20I Live Streaming: When and where to watch and follow live 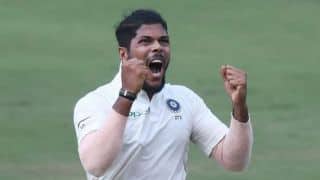