KL Rahul was pulled out of an ongoing Ranji Trophy match against Rajasthan to be brought into the Indian team.

Visakhapatnam: Indian Test captain Virat Kohli declared fit-again K L Rahul as the team’s No.1 choice opener, putting paid to veteran Gautam Gambhir’s chances of playing any further role in the ongoing series against England. After the drawn first Test where Indian batting came under scrutiny in the second innings, Rahul was pulled out of an ongoing Ranji Trophy match against Rajasthan to be brought into the Indian team. With Rahul becoming an automatic choice, it seems to be curtains for senior pro Gambhir who made a Test comeback after more than two years. FULL CRICKET SCORECARD: India vs England, 2nd Test at Visakhapatnam

“We had it pretty clear in our heads that KL is our number one choice alongwith M Vijay. He is fit at any stage, he comes back into the team and we are going to start with him. Be it pulling him out of a first-class game in between. It’s within the rules and the regulations,” Kohli told a news conference on the eve of the second Test. “We were waiting for him to recover as soon as possible. That’s how the team combinations go, you go with what you think is the best for the team. Don’t think we needed to think any differently to call back Rahul. We are glad that he’s back in the side again. That was the whole idea behind it.”

In Rahul’s absence, Gambhir played two Tests with scores of 29 and 50 against New Zealand and 20 and 0 against England and Kohli said Gambhir “played really well in different situations”. Less than a month ago, New Zealand were skittled for 79 in 23.1 overs at this venue in an ODI and Kohli said he would have no qualms exploiting home conditions which seem spin-conducive.

“Generally in Vizag, pitch has always been something that helps the spinners. So I expect the pitch to play similarly, in the one-dayer here (against New Zealand), the spinners got a few wickets. But at the same time, the quick bowlers also had some assistance early on. It’s a wicket where spinners will find it really nice to bowl on and expect the same going into the game. As I mentioned in Rajkot as well, I was surprised to see that much grass on the wicket. I hope it’s not the case this time around in Vizag because we want to focus on our strengths and play the cricket that we have as a team at home and put the pressure on the opposition.” ALSO READ: India vs England, 2nd Test: Preview and Predictions

Kohli said they are not concerned about skill or the conditions but it’s their sloppy fielding which separated both the teams.”We caught up really well in last 14-15 months. In Test cricket, if you don’t take your chances, the game is very difficult to pull back. That was the main difference rather than skills or pitch. If you take your chances, you have a team down 100/5 compared to 250/3.”

“Then it’s a different ball game altogether. We need to catch well, we need to take our half chances, we need to be more focussed on the field and that makes a hell of difference in the game. That’s something we are really looking forward to correct in this game,” Kohli said. Set an improbable 310 from a minimum of 49 overs on the final day, India found themselves cornered with 71//4 as they battled their way to draw the Rajkot Test.

Known to be an efficient batsman while chasing, Kohli said, “Pressure is the most when you are trying to save the match. When there is the pressure to win the match, you can at least play your shots. But when you are trying to save the match you have to keep the intent going and at the same time you cannot play as many shots as well. You have to be very selective and a lot of concentration is required there.” Kohli said it was a learning opportunity for their batsmen. ALSO READ: KL Rahul returns to Indian squad ahead of 2nd Test against England

“Many would have been looking at that situation in a different way that we struggled and we were put under pressure, but as a cricketer internally we know what we learnt from that situation. We look at it differently. It’s your choice to look at a particular scenario. We approached it as an opportunity to improve on that aspect which we would need for the next 10-12 years. Because to be a successful team you need to play in every situation and the good thing was that two-three of our players applied themselves along with me and relished and cherished that situation rather than being under pressure. So it was a big positive for me.”

The Test skipper said drawing the match with his dogged innings in Rajkot was more satisfying than slamming a century. “I was just focusing on one ball at a time and trying to take my mind off the situation. Actually that helps a lot in that situation, not actually thinking too much about that situation. So, you need to put you mind on the back-burner as soon as possible and to play that one particular delivery. It gave me more satisfaction as a batsman than scoring a hundred or getting a big score. Taking up a challenge is always something that feels nice when you achieve it. As I said and as you mentioned as well, it was an opportunity for me to learn as well and that’s something that I learnt about myself.” ALSO READ: Gautam Gambhir, KL Rahul, Shikhar Dhawan, Murali Vijay: Opening conundrum intensifies

On a rank turner, toss may play the most crucial role with the team batting last facing the biggest challenge but Kohli said his team is game. “We tried to make sure in the last match that all are bases are covered because toss is not in our control. Yes, you get a little advantage initially if you win the toss but it’s not that you will be put on the back-foot and will be a disadvantage (if you lose the toss). Toss has its importance but you cannot define the result of the game because of that.”

Asked whether Jayant Yadav would be a better choice than Amit Mishra who had a forgettable outing in Rajkot with three wickets, Kohli said there’s little scope for grooming a player against a top side like England. “Obviously we would like to take the best possible 11 on the field and the best bowlers who are mentally ready to pick up 20 wickets for us.” 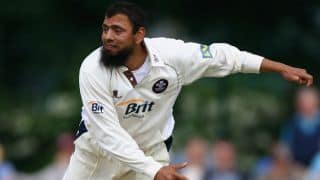