The Indian team management will meet during the course of the West Indies series to chalk out a plan for the future.

With the 2019 World Cup just eight months away and India left to play a bulk of its matches against Australia and New Zealand, and again at home against Australia and Zimbabwe before the Indian Premier League next year, the think tank is now planning on reducing the work load of a few players to keep them fresh for the global showpiece event at England and Wales.

According to a report in the Times of India on Monday, captain Virat Kohli, who missed out on the 2018 Asia Cup and the Nidahas Trophy, could be rested for a few more ODIs in the next few months. Apart from Kohli, pacers Jasprit Bumrah and Bhuvneshwar Kumar, who are not included for the two-match Test series against West Indies, are also in line to be rested.

The Indian team management will meet during the course of the West Indies series to chalk out a plan for the future as far as reducing the workload of a few players.

Virat could be rested again if need be to ensure he is fit for the World Cup. It is a rotation policy which the team has initiated to keep the best combination for the World Cup in June 2019, a BCCI source said.

Meanwhile, India are set to play the second Test against West Indies on Friday at Hyderabad. The hosts won the first Test at Rajkot by an innings and 272 runs. After the Test series, India will face West Indies in five ODIs and three T20Is. 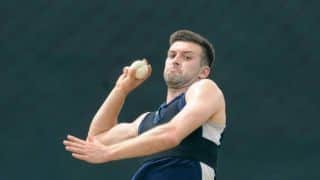