Dhoni needed 60 Tests for his 27 wins, while Kohli’s 28th came in his 48th game as India captain.

With a crushing 257-run win over West Indies which gave the visitors a 2-0 series win in the Caribbean, skipper Virat Kohli overtook MS Dhoni to become the most successful captain in India’s Test history. India’s win in Jamaica was the 28th of Kohli’s career as captain, his predecessor Dhoni winning 27 matches during his stint as captain of the national team between 2008 and 2014.

Dhoni needed 60 Tests for his 27 wins, while Kohli’s 28th came in his 48th game as India captain. The win also secured India their maiden Test clean sweep in the Caribbean, and Kohli his eighth outside the subcontinent. The win propels Kohli’s win percentage in Tests to 55.31, the best among all India Test captains, which is 10 percent more than Dhoni’s.

“Captaincy is just a C in front of your name. It’s the collective effort that matters,” Kohli said. “For us, it’s just the start of the Championship. Whatever’s happened in the past is irrelevant. We look forward to keep continuing playing good cricket. West Indies would know the areas they need to improve on. From bowling point of view, they were outstanding. Jason and Kemar were the standout bowlers for them. Their bowling attack with the red ball here is as lethal as anyone. If they get enough runs on the board, they’ll be a very dangerous opposition in Test cricket.”

In the previous Test, Kohli had also surpassed Sourav Ganguly to become India’s most successful while captaining the side away from home.

While Ganguly had led India in 11 wins while playing outside India, Kohli has led India to 12 wins. Ganguly reached the landmark in 28 Tests while Kohli, who first captained the Test team in December 2014, achieved the feat in 26 Tests.

Kohli also holds the record of leading India to two of their biggest Test wins, by runs: a 318-run win in the series opener in the ongoing series and a 304-run win over Sri Lanka in Galle in 2017. Under Kohli, India became the first side from Asia to register a Test series win in Australia when they beat the Tim Paine-led side 2-1 in the four-match series in 2018. 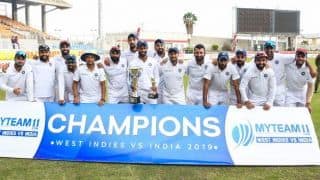