Earlier Virat Kohli and Anushka Sharma were hush-hush about their relationship. In turn they left the journalists dazed. Eventually the duo started making public appearances, attended events together and shoved the news of their breakup under the carpet.

It was on Valentine s Day when Kohli made his relationship officially public putting up a picture of the two from their trip to Uttarakhand. Slowly, they started speaking about each other through various forums.

Similarly, Kohli did not shy away from talking about his ladylove on special chat show called Diwali Special Aamir aur Virat Ke Saath.

When Aamir Khan asked about the quality that Kohli loves about Anushka, Kohli smiled and said, The best quality that I love about her is that she’s super honest. I have learnt a lot from her. And the praises went on and on:

I HAVE LEARNT ALMOST EVERYTHING IN LAST 3-4 YEARS FROM HER. : VIRAT KOHLI ABOUT ANUSHKA SHARMA.pic.twitter.com/5oKpnJWH2m

That s not it. He even has a special nickname for his lady love Nushkie.

The couple also gave a special Diwali gift to their fans. Kohli and Anushka have shot for a special commercial and a new picture of the two were released on Monday evening. The two look madly in love with each other, holding hands.

Where Anushka looks gorgeous with a red and orange lehenga, Kohli looks dapper in a bandhgala and velvet stole. 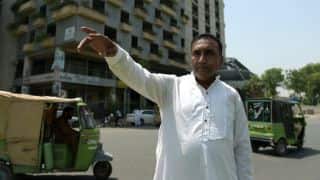