Virat Kohli will have a challenging tour of Bangladesh as India captain, says Mohammad Kaif

Virat Kohli will have a challenging tour of Bangladesh as India captain, says Mohammad Kaif

Virat Kohli will look to register his first win in Tests as captain when India take on Bangladesh.

Former India cricketer Mohammad Kaif has said that the upcoming tour of Bangladesh will be a big challenge for new Team captian Virat Kohli as the hosts play well at home. “It is going to be a big challenge for Kohli. He is the new captain. Bangladesh are playing well as we saw during the recent series against Pakistan,” Kaif told reporters on the sidelines of a function here last evening. READ: Ravi Shastri expects longer tenure as Director; welcomes Harbhajan Singh back in squad

The one-off Test against Bangladesh, starting on Wednesday, will mark Kohli’s debut as full time skipper of India’s Test team, although the stylish batsmen did lead the side in the last Test match of the series against Australia earlier this year after the sudden retirement of Mahendra Singh Dhoni from five-day game.

Kaif was here to attend the inauguration of the Police PubliC Cricket Premier League (PPCPL) organised by the Jammu and Kashmir Police. On the prospects of cricket in Kashmir, Kaif said PPCPL was a good initiative which will help the game. READ: Harbhajan Singh attracts eyeballs as India begin practice for Bangladesh tour in Kolkata

“As I was coming here, I could see players practising (in the nets). So the enthusiasm is there and PPCPL is going to be beneficial,” he said.

Kaif said the sponsors of the PPCPL should also be given credit for coming forward and making the league in Kashmir possible. The PPCPL is organised by Jammu and Kashmir Police on the pattern of Indian Premier League (IPL). As many 12 teams will compete for the championship which carries cash prizes of Rs 27 lakh with the winners bagging Rs five lakh and the trophy. READ:  Ravi Shastri to discuss his tenure with BCCI after India tour of Bangladesh 2015 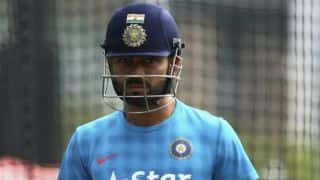 Virat Kohli: India will focus on results rather than learning during Bangladesh series