Virender Sehwag was a sensation to watch on the field and the swashbuckling batsman has been unstoppable in his second innings on Twitter.

Virender Sehwag was a sensation to watch on the field and the swashbuckling batsman has been unstoppable in his second innings on Twitter. Sehwag is often seen wishing the former and contemporary cricketers and encouraging the budding talents in his unique way along with some witty humour. He has garnered enormous attention on the social networking site and batted beautifully so far. When asked about his incredible sense of humour, Sehwag was quoted in a report from hindustantimes saying, “Someone enjoys your batting and someone enjoys your humour. Since I am

not batting any longer, so I can at least say some words, so people enjoy and give me compliments too.” ALSO READ: Sehwag s trademark wish and other messages from cricket fraternity on Virat Kohli s birthday

On trolling or getting trolled on Twitter, Sehwag quipped, I don t know how to troll people, but there are many out there, talking with that intent. I just write in a good manner. My intentions are always to write something funny and make people laugh. But then there are people who love and those who hate you that s part of your celebrity life.

When questioned about which Indian cricketer has an amazing sense of humour, Sehwag replied, “On public platform, nobody writes funny things or anything that people will not appreciate, so they are very politically correct all the time. I don t think anybody writing on twitter has humour, but yes most of them are active on social media platforms.” ALSO READ: Virender Sehwag reveals what Gabbar Singh in Sholay would have asked VVS Laxman!

When asked if his tweets are appropriate every time, Sehwag said , “Oh yes. I am very much politically correct (laughs) in my humour. If you look at my twitter wall, you won t find a single tweet that has hurt anyone. Sometimes people take tweets in a wrong way and I cannot do much about it. I just believe in wishing my colleagues and other celebrities in a manner that brings my wit out and gives people a talking point. 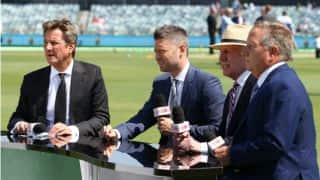