Want to spend time with family, received feelers from others: Chandrakant Pandit to assess future as Vidarbha coach

Want to spend time with family, received feelers from others: Chandrakant Pandit to assess future as Vidar

The former India wicketkeeper, who also guided Vidarbha to back-to-back Irani Trophy triumphs, added that he wants to spend more time with his family.

Two-time Ranji Trophy-winning Chandrakant Pandit‘s hugely successful tenure at Vidarbha has attracted interest from other state associations and the sought-after coach Friday said he will “assess” his future.

The former India wicketkeeper, who also guided Vidarbha to back-to-back Irani Trophy triumphs, added that he wants to spend more time with his family. (ALSO READ: Chandrakant Pandit to step down as Vidarbha coach: Report)

“I have come to Nagpur to speak to Vidarbha Cricket Association officials. I will take a call about my future in a day or two. I am having some discussions with them. Let’s see how it turns out,” Pandit told PTI.

“It is true that I want to spend some more time with my family but I have not taken any decision yet. (ALSO READ: Ranji Trophy 2018-19: Character of this side came to fore in this final, says Chandrakant Pandit)

“I have received feelers through indirect sources. Therefore I don’t know if these are offers unless I am officially contacted by state associations. But yes, there has been some interest shown to avail my services,” the former Mumbai stumper added.

Pandit has played five Tests and 36 ODIs for India from 1986 to 1992. (ALSO READ: Vidarbha becomes only the third team to defend Ranji Trophy and Irani Cup)

He was involved in his 11th Ranji final sixth as coach when Vidarbha took on Saurashtra in the final earlier this year. (ALSO READ: Vidarbha claim second successive Irani Cup on first-innings lead against Rest of India)

After featuring in five Ranji finals four for his home team Mumbai and one for Madhya Pradesh during his 21 seasons in first-class cricket, Pandit has done one better in his second avatar as coach. (ALSO READ: Vidarbha become sixth team to defend title)

In the past, he has been the India Under-19 coach for a World Cup, and also served as the Under-19 chief selector. 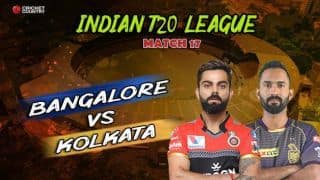