Waqar Younis believes this is a new era in cricket for Pakistan.

Lahore: Pakistan head coach Waqar Younis Friday warned only players with the right attitude will represent the national team as it embarks on a “new era” with their Bangladesh tour next week.   Pakistan lost in the quarter-finals to the victorious Australians in the World Cup last month, which was jointly hosted by Australia and New Zealand.Waqar Younis responsible for senior players exclusion from Pakistan squad, feels Abdul Razzaq

After this failure, Waqar submitted a strongly worded report calling for opener Ahmed Shehzad and middle-order batsman Umar Akmal to be dropped from the team.  He accused both players of under-performing and a lack of commitment in the report to the Pakistan Cricket Board (PCB), seen by AFP. Pakistan players miffed with Waqar Younis’s attitude: Reports

“These new players will serve Pakistan cricket in the years to come as this is a big opportunity for them,” he said. Waqar said Pakistan needed to now “move on” from the World Cup — but also stressed that all players needed to learn from their mistakes to improve. Pakistan cricket may die out if countries refuse to tour, fears Waqar Younis

Pakistan open the Bangladesh tour with the first of three one-day internationals in Dhaka next Friday. They also play a Twenty20 international and two Tests. “Of course, the most important thing for Pakistan cricket is the right kind of attitude and if that attitude, improvement in fielding and fitness do not come, we will lag far behind other teams,” said Waqar. Pakistan tour of Bangladesh 2015: Sarfraz Ahmed keen to continue performing

“This is not my team, neither it’s yours — it’s Pakistan team and only those players will play who show the right attitude. I respect those who show (the) right kind of attitude. “We have to move on. I played for Pakistan with passion and now I have tried to make the team better and better,” said Waqar, who played 87 Tests and 262 one-day matches for Pakistan as a lethal pace bowler. Fawad Alam keen to reinvent and establish himself in the Pakistan squad

He praised new one-day captain Azhar Ali, replacing Misbah-ul-Haq who retired after the World Cup, calling him “smart” and capable of grabbing the “big opportunity for him to make a difference through his captaincy”. Waqar also backed recalled spinner Saeed Ajmal saying he has worked hard for his comeback. Pakistan may finally host international games; Zimbabwe likely tourists

“We must praise Ajmal for his appetite for cricket, for the right kind of approach and he deserved a place in the team out of respect because he is humble and experienced,” said Waqar. Ajmal was recalled to all three formats for Bangladesh tour, eight months after his bowling action was reported as suspect. He was suspended a month later but was cleared to bowl at international level on re-tests in February. Mohammad Hafeez confident of clearing bowling action assessment test 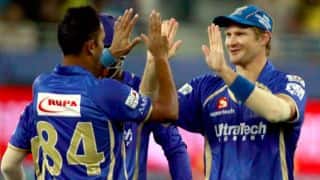