Law said that the only way to dismiss India captain Virat Kohli, currently in red hot form, is for him to falter.

West Indies coach Stuart Law, who was suspended for the first two ODIs following a breach in the ICC Code of Conduct in the Hyderabad Test, was happy to know that his side have forced India to make changes in their bowling department.

Indian bowlers leaked 320-plus runs in both the ODIs at Guwahati and Visakhapatnam with fast bowlers Umesh Yadav and Mohammed Shami wayward in their approach.

The premier pace bowling duo of Jasprit Bumrah and Bhuvneshwar Kumar made their way back to the squad announced on Thursday for the remaining three ODIs, with Shami missing out.

“Yeah, I would like to think so [on their comeback]. That’s probably the reason why they’ve [India] called back their two most experienced one-day bowlers. To our credit, we haven’t shied away from it,” Law said on Friday.

“So yeah, hopefully we are getting the Indians to ask questions to themselves. They are giving us plenty of questions to ask ourselves but at this stage, we are coming up with pretty good answers.”

The outgoing Australia coach, who departs for Middlesex, his next coaching stint after the tour of India, said that the only way to dismiss India captain Virat Kohli, currently in red hot form is for him to falter.

“How do you get Virat out? He gave us chance at 40. He is a wonderful player. I just love the way he goes about compiling an innings. Looks like he is working very hard but he’s doing it very easy. So, we do have plans to him.

“At the moment, he is coming up a lot of good answers, so we have to just keep asking questions about his technique and his abilities. In the end, he is only human. But when we get an opportunity, we have got to grab hold of it.”

Law was impressed with Shimron Hetmyer, who scored a century in the first ODI and followed it up with a 64-ball 94 at Vizag. “Hetmyer has been outstanding. [Shai] Hope got a hundred in the second game, all in all for an inexperienced side, that we have, they can hold their heads very high,” he said. 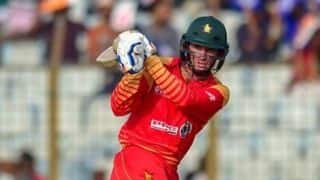