The ICC World Cup 2019 might be a few months away, but the Indian team management has already settled in on a core team for the marquee event set to be hosted by England.

The ICC World Cup 2019 might be a few months away, but the Indian team management has already settled in on a core team for the marquee event set to be hosted by England.

The World Cup starts from May 30 while India begin their campaign for a third title when they take on South Africa on June 5 in Rose Bowl, Southampton.

BCCI chief selector MSK Prasad has said that the concerns surrounding India’s middle-order have been alleviated and they have a core team in mind for the World Cup.

India are to face Australia in two T20Is followed by a five-match series later this month which will be their final two international assignments before the Indian Premier League (IPL) which will give way to the WC.

“Like most other teams, we have made up our minds with regard to the core team that will figure in the World Cup,” Prasad told The Times of India.

He further said that IPL will help keep the players in a good space. “The IPL is a major tournament that throws up a variety of challenges. I m sure the IPL will help players with their form and also keep their mind in good shape ahead of the World Cup,” he said.

India have handed debuts to several youngsters including the likes of Rishabh Pant, Shubman Gill, Khaleel Ahmed in lead up to the World Cup. Prasad said this has been done to strike a right balance of experience and youth which is necessary to win major tournament.

“To win mega events we need to have the right mix of experience and youthful exuberance,” he said. “I am sure our committee will strike that balance. Youngsters who have reached this level know exactly what is expected of them. In today s world where players are exposed to so many pressure-filled tours and tournaments prior to getting into the national squads mature faster than players of earlier eras.”

The dip in form of India top-order batsman KL Rahul has been a cause of concern and so he has been asked to play for the India A squad to get back among the runs.

“His [Rahul’s] form has become a big cause of concern. He is too good a player and I am sure he is working hard to be back among the runs. We have put him in the India A Test squad to play against England Lions so that he can spend some time in the middle and get back to form,” Prasad said. 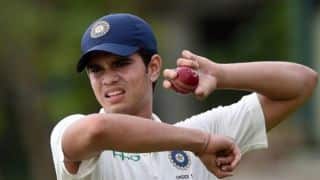