England will look to wrap up the T20I series in St Kitts, which hosts the final game too.

West Indies‘ home advantage and any momentum taken from a crushing win in the final ODI was diminished in St Lucia on Wednesday, as England won the opening T20I by four wickets.

West Indies need to win the second T20I to avoid the final game turning into a dead rubber, and given that they won the Tests and tied the ODIs, Jason Holder’s unit will be confident of a comeback. Coming off a tremendous ODI series in which he scored 424 runs at a strike-rate of 134.17, Chris Gayle is the man West Indies need to fire to take the series into a decider.

The key factors for England’s victory in St Lucia were getting Gayle cheaply and keeping a lid on Shimron Hetmyer and Carlos Brathwaite, and improving on that effort with the ball on a very small ground in Bassetterre on Saturday will be what Eoin Morgan will demand from his team.

England need improvement. Jonny Bairstow’s quick-fire 68 proved instrumental in a chase in which the next best score was Joe Denly’s 29-ball 30; Joe Root getting a duck means he still has not managed a double-figure score since June 2018. The bowlers were “magnificent” in St Lucia according to Morgan, but batting muscle is needed.

The young left-arm pacer Obed McCoy was added as a replacement for Andre Russell for the remainder of the series, and given that Oshane Thomas bowled only two overs in St Lucia, he could come in to share the hard ball with the other left-arm quick, Sheldon Cottrell. Fabien Allen replaced Devendra Bishoo in the first game and didn’t do anything, so he could be swapped.

Root plays T20Is for England on a regular basis, but given that hasn’t scored a fifty in nearly three years, the management may consider resting him. That would mean a chance for Dawid Malan who has scored four fifties in his five T20I opportunities at a strike-rate of 150.

Mark Wood was rested for the first T20I and he could still sit out as England keep a watch on him for the World Cup.

The batsmen could be in for a fun time at Warner Park, where the straight boundaries measure just 63 and 65 metres. The track is expected to be dry, and so the captains may not mind fielding first. The forecast is for a mostly clear day.

West Indies have not lost a T20I at Warner Park. They have won five games, with the other washed out.

“Hopefully, I’m the first left-armer on the team-sheet should there be one. I think that ability to swing the ball up front is why I’m here and the reason why I’ve played as much white-ball cricket around the world.” – David Willey 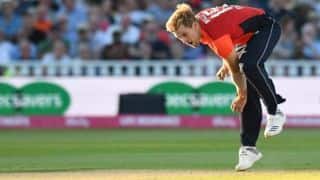 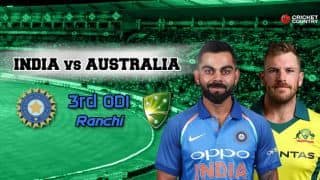