In a bid to save their chances of a clean sweep, England have ringed in a few changes ahead of the third and final Test against West Indies, some arising due to fitness or performances issues.

According to the England Cricket Board (ECB) on Friday, Jonny Bairstow will don the keeper s gloves in place of dropped Ben Foakes, while Keaton Jennings has been recalled to a 12-man squad.

Allrounder Ben Stokes missed training on Friday as he battles a bruised heel to recover for the match at St. Lucia. Mark Wood has also been included in the 12-member squad.

“It’s down to a huge amount of workload over the first two Tests. He woke up sore with his heel, England captain Joe Root said of Stokes. “He’s an integral part of all three formats and gives you great balance across the board. As we’ve seen in the recent past when he’s not been around it can make a huge difference.

“Of course, we want Ben fit and firing and ready to go as many times as possible but it’s so important he is able to do his job properly.” (ALSO READ: We need to adapt to different style of play to be really successful: Jos Buttler)

England will announce their playing XI only before the toss, but Root confirmed that he will not move up the order should Bairstow be pushed down the order.

“We’ve gone away individually and had a good think about how to get better and come back from two poor performances,” Root said.

“You have to accept that’s not good enough and find ways to improve. One of the overriding messages is that we have done some very special things over the last couple of months – we saw a huge amount of success in Sri Lanka [to win there 3-0]. (ALSO READ: Ben Stokes misses England training, Chris Woakes also in doubt)

“It has not quite worked for us here but as a side we have to remember that development, that improvement since the start of the summer – it was a big achievement beating India at home. There is an Ashes around the corner and that should be a great motivator for guys to go out and put in strong performances.”

Meanwhile, for the Windies, Kraigg Brathwaite will lead the hosts after regular captain Jason Holder was handed a one-match suspension for slow over-rate in the previous match at Antigua. 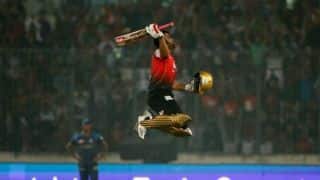