The England Women skipper starred with 3/9 including being on a hat-trick before she took herself out of the attack.

The England Women spinners led the way as India Women were beaten by eight wickets to crash out of the ICC Women’s World Twenty20 on Friday.

Heather Knight‘s decision to field was vindicated in exemplary manner as England’s slow bowlers combined to bundle out India for 112 in 19.3 overs, the skipper starring herself with 3/9 including being on a hat-trick before she took herself out of the attack.

“The way the spinners bowled in the middle was fantastic,” said Knight after the win. “We knew that any new batsman will struggle out there. The composure by the two girls to finish off the chase was outstanding as well. Anytime we got a wicket, we tried to jump on the new batter. The way the staff arranged practice against spin over the last few days has paid off.”

The left-arm spinner Sophie Ecclestone had India’s top-scorer Smriti Mandhana well caught and bowled for 34 to take the first wicket in the sixth over, and then Kirstie Gordon dismissed Harmanpreet Kaur and Veda Krishnamurthy with her left-arm spin as India lost eight wickets for 23 runs.

Knight was no less impactful, getting Dayalan Hemalatha and Anuja Patil before she decided to take herself out of the attack and call back Anya Shrubsole.

“Kirstie and Sophie have been amazing, especially the former in her first tour. They exploited the conditions really well,” said Knight. “My role is to bowl a couple of overs when we need it.”

The openers Danielle Wyatt (8) and Tammy Beaumont (1) fell early to give India a glimmer of hope, but fifties to Amy Jones and Natalie Sciver finished the chase for England in 17.1 overs to set up a final clash with No 1 Australia who hammered the defending champions West Indies in the first semi-final.

“No concerns at the top of the batting order – the conditions have been really tricky, and they’re going to get some low scores in these conditions. But they’ll be desperate to score in the final,” she said. “The crowd will come in to support both teams in the final and the atmosphere is likely to be amazing, so yes, I’m looking forward to that.” 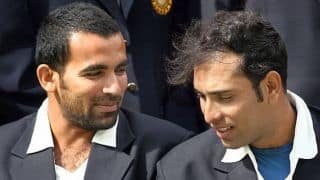