Lloyd was in London on Tuesday at an event marking 100 days until the start of the 2019 World Cup in England and Wales.

The children playing cricket in the unlikely setting of London’s Trafalgar Square could have been forgiven for not knowing the identity of the grey-haired gentleman loping between the wickets.

Yet even wearing a heavy coat to guard against the chill of an English winter morning, the tall, bespectacled and slightly stooping figure of Clive Lloyd was still instantly recognisable to generations of cricket fans.

Lloyd was in London on Tuesday at an event marking 100 days until the start of the 2019 World Cup in England and Wales.

But unlike all the England cricketers past and present also involved, including Nasser Hussain, Graeme Swann, Alastair Cook and James Anderson, Lloyd knows what it is be a World Cup-winner, having led West Indies to victories in Lord’s finals in 1975 and 1979.

The 1975 edition, the inaugural men’s World Cup, saw West Indies captain Lloyd make a superb century during a 17-run win in the final against Australia.

“It was the first World Cup — there’ll never be another first — and having won it in front of a large West Indian contingent, it was quite exciting,” Lloyd told AFP.

Modern batsmen are often expected to score at better than a run-a-ball in a one-day game.

That wasn’t the case, however, in 1975 when field restrictions had yet to become part of limited-overs cricket. Lloyd’s innings of 102 off 85 balls, including 12 fours and two sixes, in the final would have been eye-catching enough in scoring-rate terms alone.

But that he came in with West Indies having slumped to 50 for three after being sent into bat by Australia captain Ian Chappell and made a hundred against an attack featuring outstanding quicks Dennis Lillee and Jeff Thomson, as well as left-arm swing bowler Gary Gilmour, made it all the more impressive.

Lloyd — dropped early on — received excellent support from veteran batsman Rohan Kanhai who, in his 40th year, got off the mark by driving the fearsomely fast Thomson off the back foot for four.

The pair shared a stand of 149 that helped West Indies to a total of 291 for eight in a then 60 overs, with Chappell later remarking that Lloyd “battered us from one side of Lord’s to the other”.

Lloyd’s recollection was, typically, rather more understated. “I got a few runs — I think I got 102 – but the point is I got in there when we lost three quick wickets, so we were in a spot of bother.

“Rohan Kanhai and myself sort of rallied the situation and then we got to a pretty good score. We had a total that we can defend and we defended it quite well. Although it was close in the end, we were always in the ascendancy.”

West Indies had to come through a qualifying event to reach this year’s World Cup.

But they recently upset the odds to beat England 2-1 in a Test series and their 74-year-old former captain believes they could cause a few upsets at the World Cup as well, especially if self-styled “Universe Boss” Chris Gayle — a powerful left-handed batsman in the Lloyd mould — finds his form.

“I think they can be quite a formidable side if they choose the right team,” said Lloyd ahead of the start of a five-match one-day series between the West Indies and World Cup favourites England in Barbados on Wednesday.

“We have some good one-day players and let’s hope Mr Gayle fires in more ways than one. I think they can do very well in this competition.” 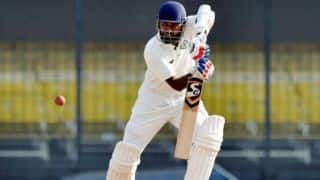