Gautam Gambhir has always been a non-conformist but he has had no regrets even if it meant an "unfulfilled career", "lot of enemies" because he could "sleep peacefully at night".

Gautam Gambhir has always been a non-conformist but he has had no regrets even if it meant an “unfulfilled career”, “lot of enemies” because he could “sleep peacefully at night”.

One of the most gutsy cricketers that the country has ever produced, Gambhir feels that the Indian society in general does not warm up to people who are forthright in their views.

“It’s not only about cricketing system, in general our society doesn’t like to be shown the mirror. We like to maintain the status quo and not look at the reality. I get suffocated by all this,” Gambhir, who is set to retire from competitive cricket after Sunday told PTI in an exclusive interview.

Whether it’s selectors or DDCA administration, Gambhir stood for whatever he felt right especially if those were cricketing issues.

“I can’t tolerate wrong things and artificiality. A lot of people around me say that I could have been diplomatic but that is simply not me. Yes, I made many enemies but I slept in peace,” said Gambhir on the penultimate day of his competitive career.

He had an ugly altercation with KP Bhaskar in 2017 when he alleged that the former coach was trying to destroy career of junior players, had arguments with Chetan Chauhan over a rookie bowler called Navdeep Saini, who he thought was cut out for higher level.

Not to forget when he was mad at a state selector, who wanted to get a below par club cricketer in the Delhi Ranji side after the team had won three straight Ranji games.

Did he never get scared that taking on establishment at every step could have affected his career? For someone, who has always been high on emotional quotient, Gambhir did let his guard down for once.

“It did affect me. I am human after all but then like I said, I could not have let the unfair (practices) prevail.

“Look, I am not being holier than thou but some of the things that go on in our system are absolutely ridiculous. I was vocal about them and I paid the price by having an unfulfilled career,” Gambhir said with a tinge of emotion in his voice.

So is Gambhir a misunderstood man? He replied: “Misunderstood a lot of times. For example, if I said, a captain is as good as his team, media and critics thought I was taking a dig at MS Dhoni.

“These critics would conveniently ignore when I repeated the statement when I was leading KKR or Delhi Ranji team. All these misunderstandings played a negative part in my career,” he admitted.

Son of a wealthy businessman, Gambhir said that the hunger to carve his own identity always urged him to push the limits. “A lot of people would say that I didn’t need to play the game as I came from an affluent background. But I wanted to have an identity of my own, I wanted my dad should be known through me rather than the other way round.

“Besides, I didn’t get anything on a platter, as I had to fight at each and every step. Therefore I am up for a scrap each time someone throws a challenge at me,” the fighter in him comes out.

With 8.63 million followers on twitter, Gambhir’s strong and opinionated views on many political issues have got him mixed reactions.

He has recently criticised the Delhi government for not being able to curb the menace of air pollution in the national capital.

Ask him what made him take on prominent politicians or a political party on social media, the highest scorer in two World Cup finals would tell you that he does nothing with any prior “planning”.

“I am not taking anyone (on) or I am not doing it with any planning. It just comes naturally to me. I want to raise issues rather than get personal. I think it is my right to question if things are not falling in place. I would urge each Indian to do it, otherwise we will be steamrolled by the system,” Gambhir replied.

There are talks that Gambhir will make for a tough no-nonsense BCCI administrator but the left-hander doesn’t want to entertain those thoughts at the moment.

“It is too early to say. I want to bring about a change but at what platform it is still undecided. Lets see what happens.”

He is retiring in the midst of the season despite scoring a hundred in his final appearance. “Well, there is never a right time or a wrong time for decisions such as retirement. I have been thinking about it for sometime but enthusiasm and eagerness to win got the better of retirement thoughts.”

His shoulder niggle also hastened the retirement. “I wanted to captain and play for the entire season but due to my shoulder niggles I thought I should re-look at that plan. I discussed with my family and they were also of the opinion that I should move on.

“In fact, it is good as so many youngsters are also coming through. At least they will get a look in now to play for Delhi,” said the 37-year-old.

By his own admission, he was never destiny’s favourite child and could have played lot more (for India). “Well, destiny has been mixed to me. I think I was good enough to play a lot more but variables were not in favour. But then I also had the honour of winning not one but two World Cup titles. So, the hundred in my last game is one more day when destiny has been kind to me.” 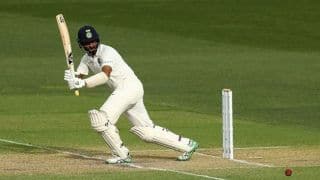