Former India opener Gautam Gambhir has urged BCCI to pay a fitting tribute to Yuvraj Singh by retiring number 12 jersey he wore during his international career.

READ: Yuvraj Singh hits Stuart Broad for six sixes in an over

Gambhir, in his column for The Times of India, was reminiscing about September and how it has a special place in his heart as it was during this month India won the inaugural ICC World T20 title under MS Dhoni (September 24, 2007).

Gambhir, who top-scored with 75 off 54 in the final, praised Yuvraj for his performance during the tournament that saw him belt six sixes in an over against England en route to the fastest fifty in T20Is, a record that remains untouched to this date.

READ: Shastri relives magic of Yuvraj’s six sixes in an over

During the showpiece T20I event, Yuvraj scored 148 runs in five innings at a stunning strike-rate of 194.73, playing a stellar role in India’s campaign.

“The month of September, meanwhile, has special emotions for me,” Gambhir wrote in TOI. “It was in this month in 2007 that we won the ICC T20 World Cup. The incredible Yuvraj Singh was in his elements. Just for the performance in that tournament and in the 2011 World Cup, I’d urge BCCI to retire the number 12 jersey that he wore. It will be a fitting tribute to a once-in-a-lifetime cricketer.”

Gambhir himself scored 227 runs including three half-centuries, finishing as the second-highest run-getter during the event. “Overall, our win typified how ‘keeping-it-simple’ works. Perhaps playing the inaugural T20 World Cup worked for us,” Gambhir said.

He added, “We didn’t know what was coming. Hence, rather than worrying about the future we concentrated on the next delivery. I remember asking my dear friend Yuvraj the secret of hitting those six sixes against England. Prince as I call him fondly said, “Gauti yaar buss ho gaya (it just happened), I never planned. What Yuvraj is saying is he kept it simple. He batted with a clear mind.” 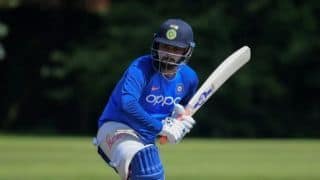