Yuvraj Singh could manage just 11 off 21 balls during his stay in the centre.

During India‘s innings against Sri Lanka in the final of the ICC World T20 2014 at the Sher-e-Bangla National stadium, Yuvraj Singh‘s struggle in the centre to get the runs coming, and scoring at a healthy strike rate caught the ire of the Twitter world. Yuvraj consumed 21 deliveries to score just 11 runs, and that too coming in a situation when India desperately needed some quick runs.

The likes of Lasith Malinga and Nuwan Kulasekara completely strangled him with yorkers and slower ones which he continuously failed to read. Yuvraj’s struggle also ensured that the in-form man, Virat Kohli faced just seven deliveries in the last four overs of the innings.

Yuvraj was lambasted on Twitter during his innings. Here are few of those  tweets:

With 11 off 21, Yuvraj Singh has played himself into the #GetLostXI. Join us during the innings break to submit your selections!

Had I been that Srilankan fielder, I would have not claimed that catch. #YuvrajSingh #wt20final — Ashwin Vignesh (@WittyVicky_) April 6, 2014

If Dravid is the Wall, Then Yuvraj Singh acted like a Speed Breaker today.

Yuvraj Singh is still a match winner. He single handedly snatched away the match from India.

Oh how I wanted Yuvi to get out … agrhhhh #wt20final 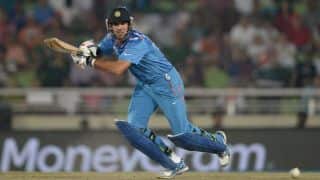