When India s Yuzvendra Chahal claimed his second wicket in Match 4 of the Super Four of 2018 Asia Cup against Pakistan at the Dubai International Stadium, Dubai on Sunday, the wrist spinner became the second fastest Indian spinner to 50 ODI wickets. It took the Haryana bowler just 30 matches to achieve the personal milestone.

His fellow wrist spinner Kuldeep Yadav, had become the quickest Indian spinner and second quickest among Indian bowlers to 50 wickets during India s first game of the Asia Cup against Hong Kong, when he got rid of Hong Kong wicketkeeper batsman Scott McKechnie.

Chahal had removed Imam ul Haq early in the match on Sunday in the eighth over, largely due MS Dhoni opting for a review against the umpire s call of not out on a leg before decision.

Dhoni got that one absolutely right and Chahal has his 49th wicket. He had to then wait till the 45th over to get his next scalp in the form of big hitting Asif Ali. With just over four overs remaining, the hard-hitting Ali, after smacking Bhuvneshwar Kumar for 21 runs in one over, went for a slog only to miss the length ball completely and was castled to hand Chahal his 50 ODI wicket.

Ajit Agarkar remains the fastest Indian to 50 wickets in ODIs, and the second fastest overall, in 23 matches. The list is led by Ajantha Mendis (19). Overall Kuldeep is slotted at No.6, just above the legendary Shane Warne.

Chahal comes in at 38th position overall alongside Michael Kasprowicz and Mitchell Johnson. Among Indian bowlers Chahal is at No.5 behind Agarkar, Kuldeep, Jasprit Bumrah (28) and Mohammad Shami (29). 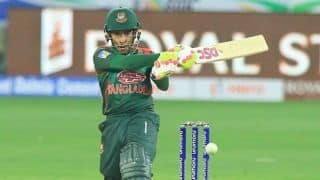