Zaheer Khan returned to cricket after a long sabbatical.

Making an impact straightaway after a near year-long sabbatical due to injury, veteran speedster Zaheer Khan said that he will get better and better as he bowls more in competitive match situation. The left-arm paceman took two early wickets to give Delhi Daredevils (DD) side a good start but he said he was still not at his best. Delhi Daredevils thrash Kings XI Punjab by 9 wickets in IPL 2015

“It was good to be back. I am glad things have worked out well. Definitely it’s not the best as I call it but I am happy to be able to bowl properly,” Zaheer said after his team’s crushing nine-wicket win over Kings XI Punjab (KXIP).

According to 36-year-old Zaheer, the thing that he missed the most was aggressive batsmen taking him on a challenge of an on-field duel.

“I enjoyed the pressures of a batsman coming at you. I was playing after a year and it was tough. It was good to feel that pressure. These are the things I missed. The pressure of setting the field, having to think about it. I was nervous but I felt good. We executed the plans well,” relief was palpable in his statement. Delhi Daredevils vs Kings XI Punjab, IPL 2015 Match 31 Highlights

Asked about comments from a certain section of media which wrote him off, Zaheer sounded dismissive. “It was their job to write. That’s the way it goes. My career will be over and I will say that it is over.”

Talking about his dismissal of dangerous Virender Sehwag off the second delivery of the KXIP innings, Zaheer said,”You can’t give him (Sehwag) room. The wicket was on slower side and it worked in my favour.” The out-of-favour paceman is still optimistic about Daredevils’ chances of making it to the play-offs. IPL 2015: Zaheer Khan taught me how to bowl to international cricketers, says Dominic Joseph

“It’s about winning eight games to make it. We now have to win 4 out of the remaining 6 games. That’s how we are looking at it. We will keep our focus and look at the positive things,” he signed off.

IPL 2015: Mumbai Indians vs Rajasthan Royals at Mumbai, pick of the tweets 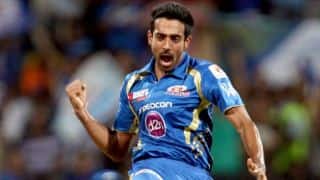