Royal Challengers Bangalore (RCB) opener Chris Gayle on Saturday dedicated to his mother on her birthday the man of the match award given to him in the Indian Premier league (IPL) 2015 match against Kolkata Knight Riders (KKR) at Eden Gardens on Saturday night. IPL 2015: Schedule with venue details

“Happy Birthday to Mom, hope she’s watching and I wish you many more, this was for you,” he said after his blistering 56-ball 96 at the Eden Gardens. IPL 2015: Points Table and Team Standings

Gayle said one of the turning points of the match was when South African Morne Morkel dropped him on 33. The West Indies left-hander, who was again dropped by Morkel at 64, fashioned his side’s three-wicket win. He also credited fellow team-mate Harshal Patel for his efforts. Watch the video highlights here.

“One of the turning points of the game was Morne dropping my catch. Apart from it, the other turning point came when I told Patel to hit one of the six off the last two deliveries off Narine’s final over. He missed out on the first one and I told him to go again. He then hit the last one out of the park,” Gayle said at the post match presentation ceremony. IPL 2015: Complete Coverage

Replying to a challenging 177 for 6 posted by the Knight Riders, the visitors rode on the Gayle storm — as the Caribbean plundered 96 runs hammering seven fours and the same number of sixes, some of them landing at the far corner of the huge Eden Gardens galleries — to romp to 179 for 7 with a full over to spare before 61,000 plus spectators. 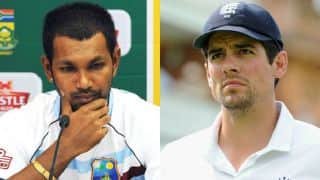 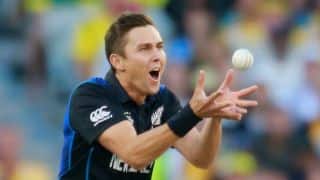