Sourav Ganguly is widely known for his exploits in limited overs cricket, however he was an amazing batsman even in the Test format and often produced fine performances under difficult conditions against th most fearsome of bowling attacks. His 144 at Brisbane is testimony to his ability to score when the going became tough for his team. After Australia had posted 323 runs, India needed to keep their calm in order to get the upper hand. However the top order didn’t perform particularly well. Rahul Dravid and Sachin Tendulkar got out for scores of one and zero respectively. VIDEO: Virat Kohli registers his highest Test score vs Australia at Melbourne

Ganguly knew the onus was on him to score. He looked highly shaky in the start of the innings but he fought it out against the likes of Jason Gillespie, Andy Bichel and Stuart MacGill. He even got a couple of edges early on in the innings but settled down and started playing some amazing shots thereafter. VIDEO: Sourav Ganguly compares Virat Kohli’s aggression with Diego Maradona

He was the top scorer for India in that innings, scoring 144 off 196 balls. He was given adequate support by VVS Laxman who scored a fine 75. The partnership gave India a lead of 86 runs in the first innings and an outside chance of winning the Test. However, it ended in a tame draw. Things could have been a lot different if Ganguly had gotten out cheaply. Deservingly, Ganguly was awarded man of the match for his effort. 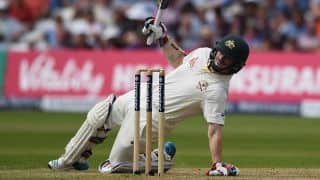 Poll: Who has been best batsmen for Australia in Ashes 2015?