South Africa were seven down when Klusener walked out to bat at Northampton's County Ground.

In the build-up to the 2019 ICC Cricket World Cup, CricketCountry brings to you the most memorable moments and matches from the tournament over the years right from its first edition, way back in 1975. With 52 days to go, in our latest World Cup Countdown, we rewind to the day when Lance Klusener conjured up an all-round performance in the 1999 World Cup.

Having been put into bat by Sri Lanka skipper Arjuna Ranatunga on May 19, 1999 at Northampton’s County Ground, South Africa found themselves in trouble.

Two early wickets each to Chaminda Vaas and Pramodya Wickramasinghe had the World Cup favourites at 53/4 in 14.5 overs, with Jacques Kallis also gone. With the score at 69, Hansie Cronje ran himself out for 8. South Africa had lost half their side in the 21st over. (REWIND: Klusener clinches victory from Sri Lanka)

Matters got worse when Jonty Rhodes fell for 17 to Muttiah Muralitharan in the 29th over, and then Shaun Pollock was caught by the offspinner off a rebound from Ranatunga’s shin at silly point to bring Klusener to the middle. Within moments, he looked on as Daryl Cullinan, on 49, jumped out at Murali and was taken by Vaas just inside the long-off boundary after he tossed the ball back into play as he fell backwards. The catch was referred to the third umpire Ken Palmer, who after replays ruled Cullinan out.

At 122/8 it seemed like South Africa would not bat out their 50 overs. Klusener, in-form with bat and ball, had other ideas.

At Cullinan’s exit, there were 94 deliveries to be bowled. Klusener played out Murali’s overs patiently, and when Wickramasinghe returned he smacked the fast bowler past point for four. With Steve Elworthy showing commendable application in batting 40 balls for 23, a ninth-wicket stand of 44 was born.

When Vaas returned and found Elworthy’s edge, South Africa were 165/9 with 27 balls left. Klusener batted sensibly with No 11 Allan Donald to get the total to 199/9 in 50 overs with an unbeaten 52 off 45 balls.

Klusener finished with 3/21 as Sri Lanka lost their last four wickets for 23 runs and was named Man of the Match for his all-round brilliance.

Man of the match: Lance Klusener. 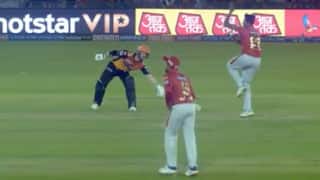 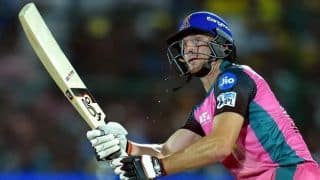