A look back at five unforgettable ODI matches between the two teams in the UAE, ahead of their 2018 Asia Cup reunion.

Ahead of Wednesday s blockbuster India vs Pakistan clash in Dubai during the 2018 Asia Cup, here s a look back at five memorable ODI matches between the two teams in the UAE.

Pakistan crash to 87 all out

India have historically struggled to beat Pakistan in the UAE, and especially at Sharjah where their overall ODI record against the arch rivals stands at six wins from 24 games. Arguably the most famous Indian win over Pakistan in Sharjah came in March 22, 1985 in the first game of the Rothmans Four-Nations Cup when they edged a low-scorer by 38 runs.

Javed Miandad won the toss and chose to bowl on a green-tinged track – rare for those days – and Imran Khan promptly led the way with a marvellous spell of pace bowling. Imran carved India up to 34/5 and then returned to claim a sixth wicket as India were bowled out for 125 in 42.4 overs. It was a hopeless scorecard for India, with Ravi Shastri lbw to Imran off the first ball of the game and only three batsmen getting into double-digits.

Imran s exceptional analysis of 10-2-14-6 would on most days have sealed victory for Pakistan, but on this one it was India who had the last laugh as Pakistan s often-brittle batting was exposed. From 35/1, Javed Miandad s team crashed to 87 all out to hand India victory. Kapil Dev (3/17), Laxman Sivaramakrishnan (2/16) and Shastri (2/17) all made telling contributions. As Rameez Raja admitted years later, Pakistan were so assured of victory that they became complacent.

For a generation of Indian cricket fans, this match hurts. You all know what happened: one ball, four runs for Pakistan to get, a full toss from Chetan Sharma and the stadium goes mad. It is a part of cricketing folk fore, with Miandad s legend cemented as far as Pakistan cricket fans are concerned.

In Sharjah on April 18, 1986, set a target of 246 to claim the Austral-Asia Cup, Pakistan had slumped to 215/7. But Miandad was still around, and that counted for a lot. It all came down to the last ball, and here is where the situation got the better of the bowler. Out come a full toss from Sharma, across the stumps when Miandad to heave the ball for six. Cue hysteria as the fans spilled onto the ground, forcing the police to wield lathis as Mianded headed straight for the pavilion.

India come close, only to choke

October 23, 1991. Game six of the Wills Trophy at Sharjah. Pakistan, defending a total of 257/7, sneak home by four runs. It was generally one-way traffic between these two teams in those days in the UAE, but this time India came to within one shot of victory. It was not happen, as from 219/5 they fell to 240/6 and then finished four runs short.

Shastri s 99-ball 77, Vinod Kambli s 40, Sanjay Manjrekar s 49 and Sachin Tendulkar s 38-ball 49 overcame first-ball ducks to Mohammad Azharuddin and Kapil to take India to the doorstep of victory. But when Tendulkar was dismissed by Saleem Malik s part-time spin, the chase gave away in stunning manner. Manoj Prabhakar finished 19 not out off 18 balls with one four, while Kiran More made one run from four balls.

On October 25, 1991 at Sharjah, Aaqib Javed became the third Pakistan bowler to take a hat-trick after Jalal-ud-Din in 1982 and Wasim Akram in 1989 and 1990. But this one was more special than the previous three instances, because it came in the final of an ODI tournament and against India.

Pakistan were defending the highest total of the tournament, 262/6. It was a strong total in those days, and once Javed removed Navjot Sidhu in his first over to leave India 32/1, the wheels came off in stunning fashion. In his third over, Aaqib trapped Shastri, Azharuddin and Tendulkar lbw each to reduce India to 47/4. He wasn t done, finishing with 7/37 to bowl Pakistan to a 72-run win to lay their hands on the Wills Trophy.

For fans of the Indian cricket team in the 1990s, a Tendulkar century in ODIs was a thrilling affair. Of the 24 occasions on which Tendulkar got to three figures in ODIs during that decade, India ended up the winning side 20 times. However, when it came to playing Pakistan, India fans only celebrated one Tendulkar century in an ODI win and it came at Sharjah on April 15, 1996 during the Pepsi Cup.

Batting first, India lost a customary early wicket in the form of Vikram Rathour off Waqar Younis. What followed was a record partnership of 231 between Tendulkar (118) and Navjot Sidhu (101) that formed the crux of a total of 305/5 – huge by the standard of the mid-90s. With Azharuddin lacing his way to a violent unbeaten 29 off 10 balls, the stage was set for an Indian win at Pakistan s bastion.

It wasn t easy, for Rashid Latif hammered 50 off 31 balls in a second-wicket stand of 72 before Aamer Sohail (78 off 76) and Ijaz Ahmed (42 off 51) took the score to 172/3. The Karnataka trio of Javagal Srinath, Anil Kumble and Venkatesh Prasad struck crucial blows to peg Pakistan back from a strong start, and from 190/4 the chase gave way to 277 all out. Tendulkar followed his century with 2/40 in a match-winning performance. 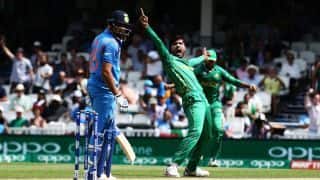