This whitewash at the hands of Bangladesh is Pakistan's lowest point in their history.

Bangladesh successfully completed their much awaited ‘Bangla-wash’ by virtue of a 8-wicket win against Pakistan at Dhaka. It was a thoroughly professional display by the hosts on Wednesday. Sandipan Banerjee lists the major highlights of this historic encounter.

1. Pakistan’s decision to bat first: Azhar Ali, the Pakistan skipper won an important toss and elected to bat first on an overcast day at Dhaka. With a rain forecast later in the day, the decision was highly questionable. Under Duckworth-Lewis (D/L )method, the equation always favours the chasing side. Pakistan made three changes to the team that lost the last game. Rahat Ali, Sarfraz Ahmed and a most importantly out of sorts Saeed Ajmal did not play. Umar Gul, Zulfiqar Babar and young Sami Aslam replaced them. Bangladesh decided to field an unchanged side. Bangladesh restrict Pakistan to 250 after Azhar Ali’s maiden ton

2. Excellent opening partnership by Azhar Ali and debutant Sami Aslam: While batting first Pakistan had an excellent start with a 91-run opening partnership. Openers, Azhar and debutant, Sami Aslam came out with a lot of positive intent. On a slowish track, where the bowl was turning, both of them attacked the Bangladesh new ball bowlers. This prompted Bangladesh skipper to introduce spinners early, but it did not have any effect on the Pakistan openers. The first wicket fell in the 18th over when Aslam got out to Hossain’s off-spin for 45. Azhar Ali scores his maiden ODI hundred

3. Azhar Ali’s maiden ODI ton: The the major highlight of the Pakistan innings was the classy and fighting hundred of Azhar, who became the first Pakistani captain to score an ODI hundred since 2010, but in vain. This was a pressure game for Azhar, both as a batsman and skipper as Pakistan were fighting to save a whitewash. He has proved his worth as a batsman in the shorter format.  Misbah-ul-Haq asks fans to back Saeed Ajmal, new-look Pakistan side following loss against Bangladesh

4. Pakistan’s slump in late overs:  Bangladesh pulled it back big time and managed to restrict Pakistan to just 250. At one point when they were 203 for two in the 39th over and it seemed Pakistan would score well in excess of 300. But some reckless batting by their middle order and tight bowling by Bangladeshi bowlers, mostly by spinners pushed them back as they lost their last eight wickets for just 47 runs. Hafeez set to resume bowling for Pakistan with remodeled action

4. Tamim Iqbal – Soumya Sarkar show:  In modern day standards, a target of 251 is not a big one. But in the start of the innings, both Bangladeshi openers were bit circumspect. They started off the chase carefully, took their time initially and played out the new ball. Against two left-handers, Pakistan captain, started with the off-spin of Mohammad Hafeez, whose action was cleared by International Cricket Council (ICC), from one end. The first 10 overs only produced 48 runs. Shakib Al Hasan to play his 150th ODI

But both, Tamim and Soumya never looked under any kind of pressure. The acceleration came after Bangladesh went past the 100-run mark. First Soumya reached his half-century in 63 balls, followed by Tamim’s, whose fifty also came in 63 balls. After his back-to-back hundreds in the series, the crowd at the at Shere Bangla National Stadium were expecting another Ton from him. But Junaid Khan, trapped him in front of the stumps for 64. The 145-run opening partnership did the job for Bangladesh. Mohammad Hafeez thanks PCB, Saqlain Mushtaq for helping him clear bowling test

5. Soumya Sarkar’s match winning century:  Soumya missed out couple of times in this series. But in this game, he was excellent. He attacked the pace bowlers initially. Later when Tamim got out, he shouldered most of the responsibility of guiding his team home. This was his maiden ton. He is now the shining star of this new generation of Bangladesh cricketers. Waqar Younis: Pakistan should change their defensive style of play 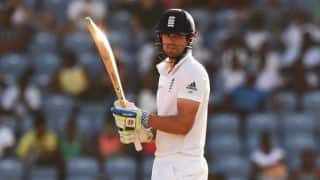