Bangladesh have given the talented side the much-needed recognition and respect that they deserved.

A strong hunger for success has given Bangladesh cricket the sweet taste of victory more frequently than they have ever encountered in their tenure as an international cricket side, bringing the fan to their feet in unanimous applause. However, a Bangladeshi newspaper decided to go ahead and publish a shameful advertisement mocking the Indian team that was classless in every aspect. Amit Banerjee feels that the Bangladeshi media in particular, and fans in general, ought to be more mature in their comebacks.

Bangladesh have shown tremendous improvement in recent times. They have developed a hunger to win — something that was visible in some of their landmark victories in the recent years. One would even go on to say that the team deserves an inspirational sports flick of its own, an idea that would work big time for any film production house. READ: India vs Bangladesh ODI series 2015: Marks out of 10 for Bangladeshi cricketers

The Tigers finished as quarter-finalists in ICC Cricket World Cup 2015 (their first-ever knockout match in a World Cup) before defeating subcontinental giants Pakistan and India in back-to-back One-Day International (ODI) series. They have given the talented side the much-needed recognition and respect that they deserved.

There is one aspect, however, that continues to be a drawback for the side — the childish, often boorish behaviour that is displayed by her fans and media that brings a bad name to the nation. The latest such incident to trigger such reactions is a controversial advertisement mocking the Indian team that was published by leading Bangladeshi newspaper Prothom Alo. READ: Mustafizur’s and other great Bangladesh ODI performances against India

The ad, which features the fictitious ‘Mustafiz Cutter’, which is an apparent reference to his off-cutters that helped him record consecutive five-wicket hauls. Portrayed below him are the likes of Ajinkya Rahane, Rohit Sharma, Virat Kohli, Ravindra Jadeja, MS Dhoni, Shikhar Dhawan and Ravichandran Ashwin, all of whose heads are partially shaved, holding a banner stating, in an apparent reference to the cutter, “We have used it. It’s your turn now.”

While the publishers of the advertisement may find it rib-tickling, it certainly will not go down well with the masses in their neighbouring country (in other words, make us bay for your blood!). Yes, people and organisations have the right to give fitting replies every now and then. Let us not forget that for an organisation of the stature of Prothom Alo ought to be mature in their comebacks. The ad wars between The Times of India and The Hindu involved the two rival Indian newspapers targeting each other with hilarious but mature ads published in either publication. READ: Bangladesh should now get the respect which they truly deserve

The incident is destined to snowball into yet another controversy between the two sides in recent times. Issues were raised over Rohit Sharma being saved by a (to be fair, erroneous) no-ball decision during the quarter-final clash in the World Cup. While India went on to thrash the Bangladeshis by 109 runs, massive protests erupted back in Bangladesh, with effigies being burned in Dhaka.

International Cricket Council (ICC) President Mustafa Kamal claiming it to be a ‘major conspiracy’ in which the umpires were ‘bought’ by ICC and BCCI. An ICC official of his stature should not have been endorsing conspiracy theories. Kamal only made a laughing stock out of himself with his claims. READ: Is Virat Kohli a cheat? Bangladesh umpire Sharfuddoula seems to think

Things did not end there. During tour of Bangladesh, Indian ‘super-fan’ Sudhir Kumar Gautam was attacked outside the Sher-e-Bangla Stadium in Mirpur by frenzied fans. While the security personnel present at the site rescued Gautam, the incident left a harrowing impression on the mascot of Indian cricket.

It is obvious that the reactions displayed by the Bangladeshi fans and the media are a result of the frustration that stems from their World Cup exit, as well as the Mauka Mauka series of advertisements. While the latter was initially meant to be a jibe directed towards the Pakistan team, the Bangladeshi fans (for reasons unknown to all but them) were livid by the ads. While one fails to comprehend their anger towards commercials that were not even aimed at them in the first place, the response videos that were created by Bangladeshi fans were tasteless and devoid of humour to say the least. READ: Bangladesh — What is so special about this team?

Indian fans have been fickle-minded as well. Sachin Tendulkar was booed at his home-ground of Wankhede Stadium in 2006. Eden Gardens had erupted in joy when Rahul Dravid was bowled by Charl Langeveldt in 2005 (Sourav Ganguly was dropped, you see). And direct attacks were launched on residences of Mohammad Kaif and Yuvraj Singh a decade apart from each other.

The media is hardly any better. Remember Arnab Goswami being lambasted after his channel criticised the Indian cricket team severely following their defeat in the World Cup semi-final? That, albeit shameful and distasteful, was not in taste as bad as the Prothom Alo commercial.

Bangladeshis have to understand that there are many on the other side of the border who respect their team for their success. Such incidents, however, serve to undo the goodwill that the Samaritans from either sides are trying to build. They must also understand the fact that such instances also serve to spoil their relations with other cricketing boards. The tirade launched by Mustafa Kamal after the World Cup exit could have led to BCCI boycotting Bangladesh Cricket Board (BCB) completely. READ: Mustafizur Rahman: Another example of Bangladesh’s growing pool of international

The rising power should keep in mind the adverse effects that such acts can have on its progress in international cricket, which so far has been really impressive. After all, humility and grace are traits that are as important to a winner as consistency. 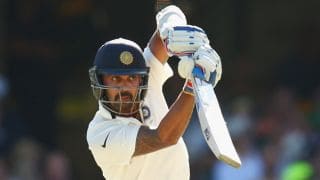