Ajit Agarkar bowled a match-winning spell of 6/41 at Adelaide Oval in India’s famous win against Australia in 2003-04.

Ajit Agarkar bowled a match-winning spell of 6 for 41 at Adelaide Oval in India’s famous win against Australia in 2003-04.

India had conceded a lead of 33 runs in the first innings, after Australia piled up a mammoth 556, aided by Ricky Ponting’s 242. But the home side fell away in the second innings, as Agarkar removed opener Justin Langer, Ponting (for a duck), Simon Katich, Andy Bichel, Jason Gillespie and No. 11 Stuart MacGill.

Sachin Tendulkar, who bowled part-time off and legspin, also chipped in with two middle-order wickets as Australia were bowled out for 196. India reached their target of 230 for the loss of six wickets, helped by an unbeaten 72 from Rahul Dravid, who had also scored a double-hundred in India’s first innings.

Agarkar started Australia’s spiralling downfall with a banana-bending inswinger from over the stumps that tailed back into the left-handed Langer to trap him dead in front. He followed that up by snaring the all-important wicket of  Ponting who tried to play a square-cut, but Aakash Chopra took a fine catch at backward point.

Agarkar then came-back to clean up the lower-order aided by reverse swing. Bichel was the first of his victims during that spell, done in by the one that left him to shatter his stumps. Katich was the next to go when he pull one from the off-stump line and got caught.

Agarkar then sorted Gillespie out with a good length delivery that held its line to catch the edge of Gillespie’s tentative poke outside his off-stump. The last man in Australia’s pecking order, MacGill’s was sent flying by the Mumbai pacer. Australia fell like a pack of cards. losing their last five wickets for just 13 runs. 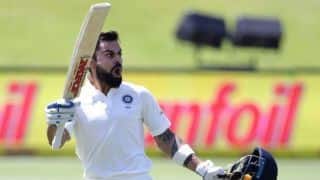