Innings of 28 and 46 and five wickets earned Irfan Pathan the Man-of-the-Match award.

A lot had happened on India 2007-08 tour of Australia Monkeygate, umpiring glitches that had put India, who even threatened up pull out of the tour, under the pump going into the third Test in Perth on January 16.

Making a comeback to the Indian team, Irfan Pathan stood up to all the ruthlessness thrown at India by a raging Australia. He contributed with bat and ball, scoring important runs and taking five wickets as India stunned the hosts to script a historic 72-run win. Anil Kumble’s team thus became the first visiting team to beat Australia in Australia in five years.

ALSO READ: Sehwag curbs his instincts to save the day in Adelaide

India had posted 330 in their first innings after Kumble called it right at the toss. The tourists were helped to the score on the back of a fine 93 from Rahul Dravid and Sachin Tendulkar was the second-highest scorer with 71.

Irfan chipped in with a valuable 28 with none of the other batsmen Virender Sehwag, Wasim Jaffer and Sourav Ganguly – all making less than 30 on the day. Mitchell Johnson was the pick of the bowlers with four wickets in his 28.2 overs going for 86, while Brett Lee snapped 3/71.

In reply, Australia were immediately on the back foot with Irfan sending back both openers Phil Jaques and Chris Rogers inside four overs. He first had Jacques, who found a thick edge to VVS Laxman at second slip, for 8, and then trapped Rogers leg before for 4.

That triggered a batting collapse as Australia found themselves at 61/5. A 102-run partnership for the sixth wicket between Andrew Symonds and Adam Gilchrist steadied the innings, but after the partnership was broken by Kumble, RP Singh ran through the batting order as Australia were bowled out for 212 to hand India a comfortable 118-run lead going into the second innings.

Pushed up the batting order to No. 3, Irfan found himself at the crease earlier than usual with Jaffer falling for 11 to Stuart Clark.

With wickets falling at the other end, Irfan stood his ground and scored a vital 46 off 64 balls with six boundaries. India were bowled out for 294 to set Australia with a 413-run target. Laxman top-scored for India with 79 with Irfan being the second-highest scorer.

As fate had it, Irfan once again delivered with the ball to send both the Aussie openers at 43/2. This time a peach of a delivery nipped away off the seam that Rogers edged it behind to MS Dhoni for 15. For his next wicket, Pathan banged it in outside off. Jacques tried to go after it but was once again caught in the slips by Jaffer.

Ishant Sharma then accounted for the next two big wickets captain Ricky Ponting (45) and Michael Hussey (46).

After Michael Clarke s fighting knock of 81 was ended by Kumble, Irfan returned to drill the final in the coffin to claim his third wicket as Clarke caught behind for 32. RP wrapped it up for India castling Shaun Tait for four as India walked away with a historic victory at the WACA.

For his all-round effort, Pathan was awarded the Man of the Match. 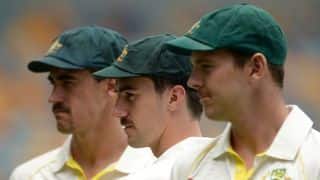 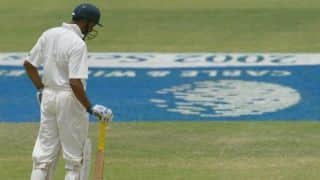