The move to bat Albie at No. 3 gives Delhi greater flexibility and the all-rounder a new lease of life.

Delhi Daredevils (DD) have experienced a torrid three years in the Indian Premier League (IPL). In fact, they have failed to find their feet ever since losing the likes of Gautam Gambir, Virender Sehwag and AB de Villiers. Delhi lacked a sprinkling of outlandishness in their 2014 campaign, which brings us to the Royal Challengers Bangalore (RCB) discard: Albie Morkel, who was bought by Delhi at the base price of Rs 30 lakhs. Read: Albie Morkel sets world record, goes past Kieron Pollard

Long ago Albie was touted as a natural successor to all-rounder Lance Klusener, and then came a phase when he was toiling to claw his way back into the playing eleven for his franchise or country on the back of his strength in either facet of the game. Conventional wisdom has it that an all-rounder is somebody who unequivocally finds a place on the back of either suit: with bat or ball. Besides the hallmark of a genuine all-rounder is that the batting average generally transcends its bowling complement. For example, Klusener averaged in excess of 41 with the bat in One-Day Internationals (ODIs), while his bowling average was down to 30 in the same format. Albie, on the other hand, averages a measly 23 with the bat, while his bowling average exceeds 37. Clearly Albie hasn’t met the definition of an all-rounder in ODI cricket, but in his heyday, he did thrive in the shortest format of the game. Read: Chennai Super Kings vs Delhi Daredevils IPL 2015 Match 2 highlights

Albie experienced a steep decline in form, particularly with the bat, since 2012. The most comprehensive indicator of this inexorable rut was the discernible ebb in his strike-rate which went into a free fall from the high 130-150 benchmark to nearly 120, which is barely acceptable by Twenty20 (T20) standards. Albie, who was a regular invitee to CSK party since the birth of the tournament, drastically veered off course in the year 2013. The plethora of options at CSK’s command meant that he was easily replaceable. After being expectedly released by the franchise in 2014, Albie failed to create an impact for Royal Challengers Bangalore last year. At the time, another IPL contract may have been a distant dream. Read: Chennai Super Kings begin IPL 2015 with 1-run victory over Delhi Daredevils

The Delhi Daredevils saw in the all-rounder easy picking at 30 lakhs and took him on board without a murmur at the auction. However, with the likes of Angelo Mathews in the squad it was going to be touch and go for the slot of the all-rounder in the eleven. As luck would have it, Delhi’s first match was in Chennai and Mathews had to miss out because of an extraneous consideration — Sri Lankan players are banned from playing in Chennai. Albie was in the thick of things from the outset, bowling the first over against his former franchise. He was wayward with the ball and paid dearly for his indiscretion. Three wicketless overs cost him 28 runs. However, the consoling fact was that the double D’s had restricted a powerful CSK line-up to 150. Indian Premier League 2015 schedule: IPL 8 match time table with venue details

The run chase didn’t require anything out of the ordinary from the Delhi batsmen but the loss of an early wicket marked the arrival of Albie Morkel and a change in their collective fortunes. JP Duminy had conceded at the toss that Delhi were unsure about their batting order, and perhaps Albie’s elevation was a shot in the dark, but it hit the nail on the head. Contrary to popular belief, Albie hadn’t been sent out as a pinch hitter and he too viewed it as an opportunity to construct an innings. There was no discernible attempt to smash the cover of the ball, Albie exercised restraint for most part, it was percentage cricket, keeping the target in mind and the ball moving along the turf for majority of the innings. The promotion in the batting order added a sense of responsibility and purpose that’s often missing at the end of an innings. There was a lingering opinion that Albie had been gravely under-utilised by teams in the last couple of years which heavily contributed to his devaluation. Now, with his bowling still bereft of oomph, his contribution with the bat is essential from the point of view of the team and his own confidence. Delhi didn’t win the match but perhaps stumbled upon the coveted formula. The move to bat Albie at No. 3 gives Delhi greater flexibility and the all-rounder a new lease of life. IPL 2015: CSK, KKR, RCB, KXIP, MI, RR, SRH, DD full team details in IPL 8

(Ankur Dhawan, heavily influenced by dystopian novels, naturally has about 59 conspiracy theories for every moment in the game of cricket. On finding a direct link between his head and the tip of his fingers, he also writes about it.) 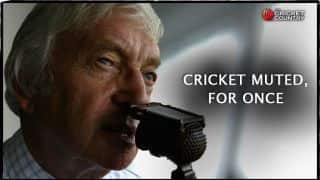 Richie Benaud passes away: Cricket muted, for once