A five-man pace attack conceded 299 runs in 39.3 overs during the loss to Bangladesh.

TAUNTON: During the innings break of match 23 of the ICC Cricket World Cup 2019, after West Indies put up 320, Curtly Ambrose tucked into a spoonful of pasta. Ten feet away, the plasma TV in the hospitality area for the media inside the County Ground in Taunton was showing clips of the 1996 World Cup semi-final between West Indies and Australia in Mohali.

Ambrose played that match, which West Indies lost spectacularly, and as he chewed his lunch, unaware that highlights of his former team’s collapse to Australia was being played, he was asked about the current West Indies’ chances of beating Bangladesh on Monday.

“Shouldn’t be difficult, with that attack. You reckon they’ve got the bowling,” replied Ambrose.

A little over three hours later, Bangladesh had chased 321 to beat West Indies by seven wickets with 51 deliveries remaining.

A pace attack made up of Sheldon Cottrell, Oshane Thomas, Jason Holder, Shannon Gabriel and Andre Russell had failed to defend 320. All told, those five men bowled 39.3 of the 41.3 overs that Bangladesh’s chase spanned, for a combined total of 299 runs. Only Russell and Thomas managed a wicket.

(ALSO READ: Who else but Shakib to drive Bangladesh to record World Cup win?)

Now take a moment to understand who was present today at the ground, apart from Ambrose, who took 630 wickets across Tests and ODIs.

Courtney Walsh, West Indies’ all-time leading wicket-taker in internationals with 746, is the current Bangladesh bowling coach. Somewhere in the ground, Joel Garner and Andy Roberts were watching. That’s 694 international wickets right there. Ian Bishop, who claimed 279 international wickets, was on commentary from the venue.

Each of these former West Indies fast bowlers rightfully holds a place in the pantheon of Caribbean greats.

This is Taunton, the heart of Somerset cricket, where Garner played for nine seasons and finished with 338 first-class wickets at 18.10 apiece and is still revered by old-timers. In 1979, Garner ransacked 55 first-class wickets for the club at an average of 13.83. His photo and statistics adorn the walls of the County Ground and the Somerset Cricket Museum. One can picture Garner close his eyes and shake his head as West Indies’ pace bowlers were nonchalantly lofted over the infield by Shakib Al Hasan and Liton Das.

In front of such illustrious West Indian fast bowlers, the current crop of pace bowlers were dismissed like local league bowlers. Yes, the track was flat. Taunton has a reputation of being a batsman’s paradise. And yes, Bangladesh came into this match with a 7-2 record in ODIs over two years. But the manner in which Shakib and Liton tore apart this pace attack was alarming.

A couple top-edges flew to the boundary for four, and another landed between Gabriel, running in from fine leg, and the wicketkeeper Shai Hope. Holder identified that as a costly lapse, singling out Gabriel for not hurrying to the ball. These unlucky moments aside, West Indies’ pace attack bowled too many hit-me balls. In specific, too many short balls that Bangladesh’s batsmen put away.

Statistical ball-by-ball analysis has Bangladesh scoring nearly 55% of their runs off short and short-of-a-length deliveries. That is massive. The hook shot that Liton swung off Gabriel for six in the 38th over … now if Garner had been hit, you can imagine the riposte he would have delivered. Liton cracked Gabriel for three sixes in a row during that over, each off the back foot.

For Holder, the selection of five pace options instead of having a frontline spin bowler was not incorrect. It was the way that he and his four pace colleagues bowled that let West Indies down.

“In hindsight you could sit here and ponder on a few things,” said Holder. “No, I think the balance was not an issue today. We didn’t execute. I think the quick bowlers could have done their job. Execution for me today was the issue. And it paid off, hurt us in the end. Sorry.”

Shakib, who was at the heart of Bangladesh’s record chase – their highest in ODIs and the second-highest in a World Cup – saw it differently.

“They bowled in two areas either full or short. We knew it was going to come, and we prepared for those challenges,” he said. “I thought they [West Indies] were not patient enough to bowl in good areas for a longer period of time. We knew we were getting enough bad balls to hit boundaries. We never had the pressure to look for it.”

No pressure, despite West Indies playing five pace bowlers. The same West Indies that blew away Pakistan for 105 in their World Cup opener and had Australia five down for not much, only to be pushed back by Steve Smith, Alex Carey and Nathan Coulter-Nile.

This latest defeat has left West Indies precariously poised in the tournament. India and New Zealand await, and Holder knows how difficult it is for his team to stay in contention for the semi-finals. He wants to write off Monday as a bad day, but if West Indies are to push for the final four of the World Cup, it will need a strategic shift from the current plan – whatever that may be.

And it may be worth Holder’s time to seek a few words with Garner, Roberts, Ambrose and Bishop for a little advice. 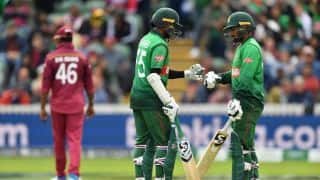 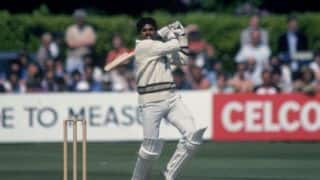