On the day he crossed 6,000 runs, Shakib scored what could be Bangladesh's best ODI hundred.

TAUNTON: At around nine am local time on Monday, Shakib Al Hasan emerged from the Bangladesh dressing room, padded up and with a bat tucked under one arm. In the other, he carried a helmet. There was an hour to go before the toss for match 23 of the ICC Cricket World Cup 2019, and as is customary with international cricketers, Shakib was here for a net before the big fixture against West Indies.

He’s been carrying a niggle since returning from surgery earlier this year, but his batting in the World Cup wouldn’t have indicated it. That’s Shakib for you.

After taking guard in one of the nets on the County Ground outfield, Shakib received throw-downs from Neil McKenzie, the former South African Test opener now Bangladesh’s batting coach. The majority of the 20-odd minutes that Shakib batted against McKenzie was spent cutting and driving. A few deliveries had him going back to defend of deflect, but overall the focus was on getting Shakib driving and cutting and, on occasion, pulling.

And while this was not match simulation or a proper session against one of his pace-bowling team-mates or a net bowler, it was an intense period of batting. Shakib’s driving and cutting were crisp and authoritative. For a man coming off a World Cup century, the extra focus to hone his batting an hour before the match underlined his focus. But what really stood out was how his shot selection was a forewarning of what Shakib would produce several hours later.

Set a target of 321, Bangladesh pulled off the second-highest successful World Cup chase with 51 deliveries to spare. Shakib was at the heart of this epic victory, scoring an unbeaten 124 off 99 balls. With Liton Das – playing his first World Cup game – Shakib took the game away from West Indies in an alliance of 189 in 22.3 overs.

On the day he crossed 6,000 runs on ODIs – just the second Bangladesh cricketer to do so after Tamim Iqbal – Shakib scored what could, arguably, be Bangladesh’s best hundred in the format.

Shakib had been here before. Two summers ago in this same country, Bangladesh chased 266 to eliminate New Zealand from the ICC Champions Trophy and enter the semi-finals. Shakib scored 114 off 115 balls, with help from Mahmudullah who made an unbeaten 102 from 107. The two put on a partnership of 224 for the fourth wicket, a record for Bangladesh and the second-best in Champions Trophy history.

This game was different. For starters, this is the World Cup. A knockout it wasn’t, but Bangladesh needed a win to boost their chances of qualifying for the semi-finals. Bangladesh’s target was higher than Cardiff 2017. The track was flat, yes, but the target was 321.

In 41.3 overs, Bangladesh won. Shakib hit 16 fours, most of them off the middle of his bat. As he had practice in the nets before the match, Shakib drove and cut with sublime timing and placement. His first scoring shot, to the first ball he faced, was a purring drive into the offside for three. The shot that gave him his ninth ODI hundred was a drive past the cover fielder for four. The coruscating pull shot he nailed off Oshane Thomas early in his innings was mesmeric. Later, his half-century secured, Shakib thumped two fours back past the stumps.

It was as if he knew how West Indies would bowl to him.

Oh hang on, Shakib actually did know what to expect.

“They bowled in two areas – either full or short. We knew it was going to come, and we prepared for those challenges,” Shakib told reporters after the match. “Everyone had their own ways to adjust to those short balls. And I think everyone had their particular game plan which worked brilliantly. I thought they [West Indies] were not patient enough to bowl in good areas for a longer period of time.”

The amazing part of Shakib’s hundred was the ability to keep finding boundaries. He rattled along at well over a run-a-ball to his fifty and century. His horizontal bat shots were terrific, as was his running between the wickets.

“At this moment I’m seeing the ball really well,” he said. “I think it is one of the key part of my batting that I’ve been watching the ball really well at this moment. And I’m getting more time when I’m batting. So it’s been helping me a lot. I don’t know if this is the best I have been batting or not, but so far it’s going well and fingers crossed, hope it continues.”

And what of the pressure of chasing 321, when only once before in a World Cup has as many been achieved?

Apart from his scintillating batting, Shakib the enforcer and leader was on view in Taunton. After 30 overs, Bangladesh were 210/3. Shakib had 89 of those runs. The asking rate was 5.6. The current rate was seven. Liton missed an incutter from Jason Holder. He looked up at fleetingly at Shakib, who raised his left hand to indicate it was fine, don’t get flustered. Liton mistimed a pull shot over mid-on for one, and wanted two. Shakib shooed him back. Next ball, Shakib turned off his pads and sprinted off, hell-bent on returning for the second. Liton pumped too, and two were had.

When Liton mistimed a forceful shot later, Shakib again raised a hand as if to say “chill, we’ve got this.” Liton held his composure and then uppercut six over third man, a shot that had Shakib nodding his head in approval.

When the winning runs were hit – fittingly, a pull from Liton off another hopeless short ball – Shakib pumped a fist and smiled. The chase had gone off stunningly – or to plan, as Shakib will have you believe. 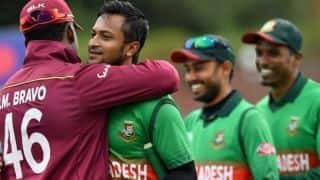