Pakistan could still make the semis, provided they win their remaining three games.

LONDON: In a qawwali – that centuries old Sufi form of devotional music – the first song is always a Hamd. Praise. The comes the Naat. Poetry.

On the best of days, down the decades, Pakistan cricket teams have been able to mesmerise all those watching by their sheer brilliance, at times incomprehensible to even the most loyal and knowledgable Pakistan fans. On days like these, it is so often their many fascinating fast bowlers – go on, pick one, any one, and he’s bound to have had that kind of day – who leads the Hamd. Sometimes from ball one, sometimes at the back end of an innings. Many times, out of nowhere. Literally, nowhere.

Then, his ears pricked by the magic about to unfold, another fast bowler is liable to pick up the tempo and produce an over or two of five or sheer musical brilliance. The Naat. Together, an assortment of Pakistan quicks has so many times been able to lead the team’s chorus towards an ecstatic crescendo, resulting in performances that turn games of cricket on their heads and leave you dizzy, sometimes speechless.

On the worst of days, down the decades, Pakistan cricket teams have been able to produce something that sounds like a castrated goat. Such days litter their storied cricketing history.

And then there are days like Sunday at Lord’s, in match 30 of the ICC Cricket World Cup 2019, when the Pakistan cricket team that turned up to try and beat South Africa to stay alive in the tournament did just that, but made you scratch your head and wonder how it didn’t lose. Yes, one of those performances from the ‘We Are Pakistan, Don’t Try to Make Sense of Us’ greatest hits vinyl collection.

Sarfaraz Ahmed‘s team tried to make magical music at Lord’s. They hit some high notes, dropped too low at other junctures and then at times went totally tone-deaf.

It is a story worth retelling.

Sarfaraz wins the toss on a green-tinged surface, in the first match of this World Cup at Lord’s. (Just as an aside, the last World Cup match here was 20 years ago, when Pakistan lost to Australia in the 1999 final). A great toss to win, as luckless South Africa captain Faf du Plessis rues later. Pakistan’s openers, the lefties Fakhar Zaman and Imam-ul-Haq, blaze away to put on 81 in 14.5 overs. Classy batting, crisp shots, not many risks.

Then both depart for 44 apiece, Fakhar to a brain-dead attempt at a reverse-lap shot when he’s motoring along with orthodox shots. The music, starting to build, scratches. Imam departs not long after. The successful bowler is Imran Tahir, born in Lahore and migrated to South Africa in the late 90s. Tahir himself is shaping to break into a qawwali of his own, with the wickets of Fakhar and Imam to send him running towards midwicket, arms outstretched, legs pumping, hair flying. Theatrics and Tahir are as intertwined as bread and butter, saag and roti, the qawwali and Nusrat Fateh Ali Khan.

Babar Azam gets the tempo back with a fine innings. A Babar Azam innings, confidence-coated and not lacking in quality. He is assisted, ever so briefly, by Mohammad Hafeez who is hell-bent on sweeping the spinners and perishes doing so, for 20. The music, once again, stumbles.

Enter Haris Sohail, in his second game of the tournament, and a period of musical excellence ensues. While Babar purrs, Sohail does not hold back. He cuts, drives and pulls with authority. He’s in a hurry, speeding to 23 off 11 balls. The momentum builds, the music sucks you in. Something is stirring inside these two batsmen.

Then, trying to hit a higher note, Babar falls for 69 off 80 balls. After the match, Pakistan’s coach Mickey Arthur finds himself defending Babar’s fifty for being half-full. Babar, he reckons, will one day “be right up there as one of Pakistan’s great batsmen”. So there’s more music to be made. The Naat.

During the first innings, Twitter memes of Sarfaraz do the rounds. A picture of him standing on the Lord’s balcony, bent over the railing and yelling something to someone below, is attracting many comments. Pakistan humour is a different level.

Hafeez opens the bowling. Just the fifth time ever that a Pakistan spinner has bowled the first ball of a World Cup game. For the record, he did once before, in 2011. First ball faced, Quinton de Kock steps out and hits the ball towards mid-on where Wahab Riaz dives to his right and drops the catch.

Mohammad Amir hits Hashim Amla on the pads, the batsman late on the flick. He appeals. No dice. Pakistan review the not-out decision. Amir’s team-mates surround him behind the non-striker’s stumps. When the verdict is given in Amir’s favour, the huddle roars as one. ‘Pakistan, Pakistan!’ chants the sea of green supporters at Lord’s. ‘Pakistan Zindabad!‘ Seven balls, one dropped catch and a wicket.

The qawwali is on, but the tempo isn’t quite right.

Shadab Khan, at backward point, stops a push from de Kock and immediately releases the ball at the nonstriker’s end. He missed the stumps and the man at mid-on backs up. Amir raises a hand to Shadab as if to say ‘bhai, tu rehne de‘ (brother, leave it be). Then Amir curves the ball past de Kock’s outer edge like a dress hugging a runway model. The crowd lets out a collective gasp.

Shadab takes two big wickets with his assortment of spinners, but also drops a catch at point. A misjudged catch at long-off by Amir has Arthur on his feet, then flopping back in his seat in disgust. Amir returns to bowl a second spell moments later and gets Faf du Plessis for 63. Amir claps his hands animatedly, and the fans go wild. Arthur, on the balcony, grins.

Then Amir puts down a caught-and-bowled to reprieve David Miller. The cameras pan back to Arthur, who grimaces.

Pakistan have dropped the most catches this World Cup – 16. Six of them come in this one. Sarfaraz moves to his right but puts down a thick edge that Wahab produces off Chris Morris’ bat. Then Amir drops a third catch, off the very next ball, to give Miller another life. Wahab cannot believe it. Arthur cannot believe it. The Pakistan fans cannot believe it.

South Africa’s asking rate has crossed 11 an over, but surely Pakistan cannot lose it from here?

A Pakistan friend texts me: “The amount of dropped catches. Typical Pakistan. You can’t win like that.”

Pakistan keep it together, as only they can. Wahab gets a third spell and finishes off South Africa. Out of the blue, reverse swing is on view. Stunning, delicious reverse swing. Three wickets to Wahab, left-arm pace, all bowled. The same Wahab who a few months ago was rejected by Arthur for Pakistan’s World Cup squad for being unfit.

“It’s been well documented; we left Wahab out for reasons that were documented,” Arthur says afterwards. “The Wahab now is not the Wahab that was two years ago, and sometimes you’ve got to be cruel to be kind. I couldn’t be more happier that he’s turning in these performances.”

(ALSO READ: We are not doing ourselves justice as a team: Faf du Plessis)

Pakistan win by 49 runs to stay alive in the World Cup. It wasn’t brilliant, it wasn’t horrible. It was that and a bit more, in various notes of muddled music.

“We are very firmly in the World Cup. We win our next three games, we’ll qualify. So we know that,” says Arthur. “We bowled well, we batted well, we didn’t field well today. So when we put all three disciplines together, we’ll be exceptional.”

On Sunday at Lord’s, Pakistan were not exceptional but they did enough to beat a down-and-out South African team. Tougher opponents await in New Zealand and Bangladesh. Afghanistan challenged India down to the last over on Saturday, so that match is shaping like a banana skin that Pakistan can’t afford to slip on.

Pakistan will again try to perform a qawwali for their passionate fans to savour. They will hope to intoxicate their opponents so that they can deliver more knockout punches. Arthur will hope the fielders take their catches. The fans will hope to be enthralled again, swayed by the music that only Pakistan cricket teams can create. Cricket World Cup 2019: The biggest downside is we are not doing ourselves justice as a team: Faf du Plessis 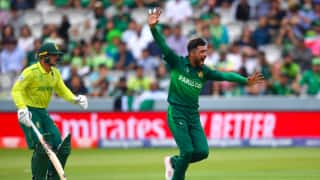