With the defeat against Pakistan, South Africa were eliminated from a place in the semifinals.

Haris Sohail and Babar Azam starred with the bat and Shadab Khan, Wahab Riaz and Mohammad Amir shared eight wickets amongst themselves as Pakistan returned to winnings ways, beating South Africa by 49 runs in the 30th match of the ICC Cricket World Cup 2019 at the Lord s Cricket Ground on Sunday.

Electing to bat, Pakistan scored 308 after Imam-ul-Haq and Fakhar Zaman put up a -run stand for the opening wicket. Sohail, who replaced Shoaib Malik in the playing XI, and Babar then made sure Pakistan go past 300-run mark, with the left-hander scoring 89 and Babar scoring 69.

The Faf du Plessis-led side, meanwhile, suffered their fifth defeat in seven matches having won one and one being a washout in the World Cup 2019 and are languishing at the ninth spot with three points against their name.

Pakistan will now take on New Zealand (on June 26), Afghanistan (on June 29) and Bangladesh (on July 5).

The Proteas, meanwhile, will face Sri Lanka (on June 28) and Australia (on July 6) in their last two matches of the league stage. 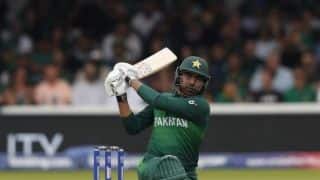