The crippling loss to West Indies ultimately made a huge difference in Pakistan's campaign.

LONDON: Even by the sometimes absurd standards of Pakistan cricket, this one is beyond comprehension. No, really, it is. Even Sarfaraz Ahmed, who during his captaincy career has seen his team collapse from positions of control with the regularity of Big Ben striking on the hour, was left searching for words as to how Pakistan are left to earn a 0.98 increase in their net run-rate to knock out New Zealand.

To upend the form book and make history – as in history of mythical proportions – Pakistan must beat Bangladesh at Lord’s on Saturday by at least 308 runs to qualify for the semi-finals of the ICC Cricket World Cup 2019.

South Africa needing 22 off one ball in the 1992 World Cup semi-finals it is not, but it comes close. It is the cricketing equivalent of Odysseus trying to get to the island of Ithaca from the war at Troy, but on a moped.

On the eve of Pakistan’s mission impossible at Lord’s, Sarfaraz cut a somewhat disconsolate figure as he fronted upto reporters to answer a volley of questions. Where did it all go wrong, Sarfaraz was asked. Not once, but thrice.

He pinpointed Pakistan’s loss to West Indies in their opening match of the World Cup, where they were bowled out for 105 and were beaten by seven wickets in just 13.4 overs. That was the loss, said Sarfaraz, that really dented Pakistan’s net run-rate.

He rued the loss to Australia at Taunton, where chasing 308 his team plummeted from 136/2 to 160/6 and lost by 41 runs. Losing to India, of course, was a bad one, he reminded us. Sarfaraz’s words were at times strung together by hope, more than realism.

“We know about the 316-run margin, as you have reminded me. It is very difficult. Only if you bat first can you score 400 or 500 runs. If you think realistically, then we can only try. But the first real thing will be to win the match. I don’t know what the study is behind [places decided by NRR] but I can’t do anything.”

Pakistan have not had enough star performers. Mohammad Amir has been excellent. Babar Azam has carried the batting superbly while not looking, at times, anything like Babar Azam. The openers, Fakhar Zaman and Imam-ul-Haq, have had middling runs. Imad Wasim won a match, young Shaheen Shah Afridi has dazzled in patches.

Wahab Riaz apart, the experienced players have disappointed. Sarfaraz averages 28, has dropped catches, has made strange calls and was caught yawning behind the stumps during the loss to India at Old Trafford. The two Grand Old Men of this squad, Mohammad Hafeez and Shoaib Malik, are on their way out. Lord’s on Saturday could be the last ODI for Hafeez, or it could be Malik’s if he returns to the team.

Since he made 84 in the win over England over a month ago, Hafeez has scores of 46, 9, 20, 32 and 19. More than the meagre returns, it is the way in which Hafeez has been dismissed in these matches – sweeping a full toss from Aaron Finch to midwicket, finding the lone fielder at deep square leg, missing a sweep against Aiden Markram, hitting Kane Williamson to cow corner, cutting Mujeeb-ur-Rahman straight to point – that show a batsman prone to getting out to part-time bowlers.

That haphazard batting is reflective of the forces that have dragged Pakistan down, but speaks more of the selection for this World Cup. Should Hafeez and Malik have been here?

Sarfaraz on Thursday found himself defending Hafeez and Malik’s shot selection and the inconsistency of Fakhar and Imam and Shadab Khan. He identified Babar’s batting, Afridi’s bowling and Amir’s return to form as positives from this World Cup. He said he was very pleased to see Wahab break his way into the team and do well. He praised Imam for helping Pakistan avoid defeat to Afghanistan.

On Pakistan’s inconsistency, Sarfaraz struggled. “Fluctuation in Pakistan cricket isn t a new thing. It s been happening forever,” he said. “We haven t played good enough cricket, but no team has managed a comeback in this World Cup like Pakistan.”

Too true. The comparisons with Pakistan’s campaign at the 1992 World Cup were fun, and that #1992MeinBhi buzz was a hoot. Pakistan were exhilarating as only they can be, winning three in a row to send their passionate fans into near delirium. But Sarfaraz’s team put themselves in this position, that is the truth.

During that epic World Cup run back in 1992, Imran Khan, in his 40th year and nursing a troublesome right shoulder, famously told his team: “Listen, just be as if you were a cornered tiger.”

In 2019, it is anyone’s guess what Sarfaraz has told his team-mates. 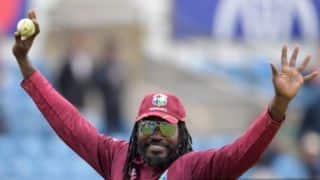