The rain is threatening to ruin more Cricket World Cup matches in England.

LONDON: There’s nothing quite as relaxing and comfortable as listening to the pitter-patter of rain on a window pane with a nice hot cup in your hand, right?

Well, not quite. Not when you’ve sat and watched two consecutive ODIs of the ICC Cricket World Cup 2019 washed out without a ball bowled.

This is a very, very wet English summer, unexpected by many. Sitting at the County Ground situated at Neville Road in Bristol for two straight washed out matches – thankfully, there was a quick trip to Kennington Oval to watch India beat Australia – and watching the rain fall steadily on the miniature ground, you get plenty of time for chit-chat in the media box. Apart from many cups of coffee and several trips to the cookies and biscuits table which remained well stocked (Thank you, venue manager, from the bottom of my heart … or should I say, stomach.)

Niall O’Brien, the former Ireland wicketkeeper-batsman now also a commentator and TV presenter, is sitting in the media box earlier than anyone else and has no hesitation in stating: “There’s no game happening today.”

Not long later, Mike Atherton wanders in and peers through the glass of the press box and purses his lips. “Grim,” he says.

Bazid Khan, the former Pakistan batsman turned TV commentator, is standing looking at the rain fall pitter-patter, hands in pockets. We chat about the weather, food and cricket. We both know there is no chance that the Sri Lanka vs Bangladesh match will happen. After a few minutes, I excuse myself and tell Bazid that I am going to go down to the ground level for a while.

On a dull and frustrating day, such slivers of straight-faced humour make one chuckle.

The travelling Sri Lanka reporters, having to sit and watch consecutive ODIs get washed out, are understandably downcast. Their team lost to New Zealand, narrowly beat Afghanistan and then has had to look in on as both games in Bristol were washed out. Sri Lanka’s senior most cricket writer sees me return to Bristol after the detour to London, and immediately shakes his head

“You’re back, and the rain is still here. I hope we get a game this time,” he says, somewhat optimistically.

I tell him that the chance of a cricket match in rainy Bristol is about as likely as Donald Trump tweeting praise of the American media, and he chuckles. Less than 24 hours later, after the Sri Lanka vs Bangladesh match is called off without a ball bowled, and many of us are leaving the press box, I meet the same journalist. He asks me where my next match is. I tell him Sri Lanka vs Australia at Kennington Oval. He wags a finger at me and warns me to stay far away from the venue, lest I bring more rain to dampen the Sri Lanka cricket team’s campaign.

In a press conference after the abandonment, Bangladesh coach Steve Rhodes questions the logic of not having reserve days at the World Cup. Later that evening, the ICC sends out a statement defending their decision not to implement reserve days. If only the weather changed that fast.

The cabbie who takes me to Bristol Temple Meads railway station tells me he got back from Lyon, in the south of France, a few days ago. Between the English weather and Brexit, he wants to leave England. Bristol depresses him. The slate grey skies and constant drizzle, he says, are too much. And when winter comes, he says it gets really depressing. I ask him where he’d like to move. Dubai, he replies. He wants to wear shorts and a t-shirt all year round.

The British newspapers have dedicated decent coverage space to the Cricket World Cup, but as you can expect it is dwarfed by football. The ongoing FIFA Women’s World Cup gets prominently featured in certain newspapers, who allot far less space to the cricket tournament happening in their backyard.

The Times is one that stands out. The copies of Atherton and former England cricketer Steve James get good billing inside the pages of the most famous British newspaper. It is a good way to pass time when traveling via train from city to city.

From cold, windy and frustratingly wet Bristol, one makes their way via the Great Western Railways to London hoping for a better scenario. London is overcast, grey and drizzling. While the temperature rises, thankfully, from a bitingly cold nine degrees to a more pleasant 13 in England’s capital, the mood does not exactly perk up.

News at Kennington Oval is that Nuwan Pradeep has returned to bowling after the injury setback in Bristol. Sri Lanka are forced to head indoors, however, as rain has it’s say again. 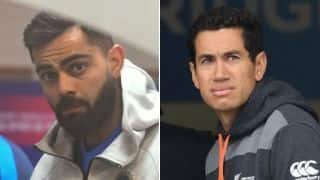 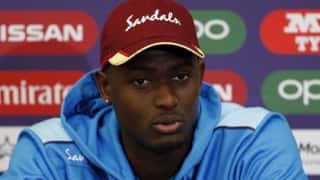